Play the game before the movie is out
Being a fan of the Ally-McBeal-TV-series because of the weird cases and not because of the drama outside of the courtroom, loving the adventure genre for its investigative parts (finding more or less logical solutions to problems and situations), I always wanted to give the Ace Attorney series a try, but never quite got around it, mainly because the cartridges weren’t the cheapest and because of the anime storytelling.
But before watching the movie adaptation at the Fantasy Filmfest, I gave myself the time and motivation to see what it was all about, something I’ve done in the past with other source material as well (Lord of the Rings among others I didn’t regret reading before the theatrical release).

Trials with investigative character
Gameplay in all three titles remains more or less the same and is quite unique, compared to other adventure titles or even visual novels, even though there are certain similarities to Hotel Dusk: Room 215 and Last Window.
Divided into two parts (investigation and courtroom), one plays as Phoenix Wright, a defense attorney, who talks to witnesses, collects evidence and does everything to have the judge pass the NOT GUILTY verdict at the end.
The first part offers a wide selection of places to visit, with the only drawback that there’s no map and one has to go through other screens, which can be quite annoying, just like in most first-person-adventures, even though there’s at least no pressing two directional buttons just to turn around. What’s also a bit time-consuming, are the constant time-place-descriptions, i.e. everytime something new happens at one place, like a character appearing, one has to wait for this text to disappear.
The second part only takes place in the courtroom and switches between the reactions of the witness, defendant, attorneys and judge, and demands a higher attention span due to the importance of each individual statement.

Read ’til you drop
The amount of text to read is not to be ignored. Even if most of the characters are memorable, there’s just too much of the stereotypical anime dramatization, and therefore dialogues are drawn out way too long. Especially the sense of humor is atrociously bad at certain points. Balancing the serious murder cases and light comedy isn’t what the series is very good at. Add some constant whining of the characters and their personal fears, something which is already quite hard to swallow in JRPGs, and you end up with a mixed bag of text to read.

OBJECTION!!!!
What the series does achieve quite admirably is that the player is constantly involved in the procedures an attorney has to go through. Every single piece of evidence which has to be collected, every place which has to be looked at in minute detail, and every witness statement which has to be scrutinized serves to give the player a feeling of accomplishment. Especially when it comes to cross-examination in which one can press a witness to get further information or present evidence, this has to be one of the most demanding adventure games I’ve played.
But the biggest strength is also one of the weaknesses again, because there are some moments when it boils down to guess-work. It happens quite a few times when one presents random evidence just to guess what the programmers wanted the player to do, and only after constant resets of the console (it’s nearly impossible to complete the game without using that technique) one finds the right time to press the witness or find the right evidence. It becomes even more difficult in the second and third game when one cannot only present things as evidence, but also people, so there are even more possibilities to find contradictions in a witness’ statement.

The individual games in a nutshell

The first game is actually the best combination of investigation and cross-examinations, because not only is the amount of evidence manageable, but the cases themselves are more straightforward and realistic and comprehensible. There is a DS-exclusive episode at the end which introduces some CSI-style investigation tools, like dusting fingerprints and looking at evidence from different angles in 3D, which is a bit drawn out, but all in all that’s the best package to get.

The sequel has some interesting cases and characters as well, but usually the conclusions are pretty far-fetched. What it does introduce as an original and quite fun game mechanic is the psyche-lock: Some characters have one or more of this lock, which means they hide something deep inside their subconsciousness. Only with the correct evidence one can break through the barrier and unlock the secret. 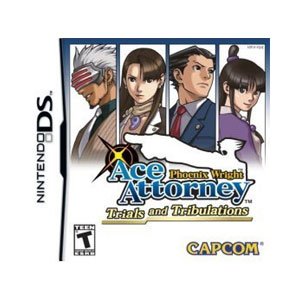 The third game has an interesting approach to connect most of the characters and stories of the former games (even if there’s nothing new in the gameplay department), but at the end it gets on a pedestal which is way too high for its own sake, falling down because of its overcomplicated and quite ridiculous conclusion with lots of spiritual mumbo jumbo. Still that’s probably due to the nature of the anime tropes, mainly because the relationships of the characters overshadow the quite simplistic cases themselves, being too dramatic to actually make much sense in the end.

For those who persevere with time and have an affinity for anime stereotypes
Even if the sequels try too much and too hard to get the player involved, the Ace Attorney series is definitely worth the time if one is tired of most of today’s adventure game market which becomes more and more casual-friendly when it comes to the difficulty curve. Going through some bad jokes and uber-drama is negligible if one looks at the whole picture and gameplay experience no other series can offer.