After a pretty disappointing last year and the typical 50%-good-50%-bad-ratio of the Nights, I was pretty excited for the Fantasy Filmfest this time. First (before any movie titles were announced) I thought about getting single tickets or even skipping the whole thing, but I was glad to have bought the weekly-ticket. Otherwise I’d have to carry more tickets than my friend Mark here who came all the way from the UK to experience the festival from Thursday til (half of) Sunday ;):

Even if the festival logo with that stupid clown’s nose was one of the worst I’ve seen (and looking at Facebook entries, I’m not the only one with that opinion), the selection of movies looked promising as, unlike last year, there were quite a lot of genre movies, paying tribute to the name itself, giving the opportunity to watch many horror and fantasy films.

Day 1
Thursday, September 6th 2012
But the genre movies weren’t the only refreshing things one got to see as one received some interesting (even if to a certain degree quite useless) goodies:

Whoever designed the not-scary-looking cover and put it in blue on a white shirt, well… let’s hope he won’t do it again next year. At least the bag is a nice treat, especially since the only time I got another one was at the anniversary last year (but with lots of awful movies).
A bit more creative were the things found in that small white box: 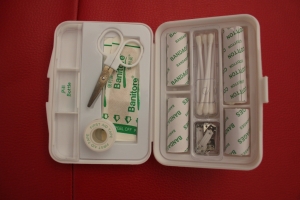 After all, during a film festival week there’s not much time for hygiene anyway… even if one should ask what the bandages were for. Maybe for some after-the-guy-next-to-you-doesn’t-stop-talking-accident treatment :)?
What about that inflatable…thing? A cushion for your neck or your behind? Who knows… it’s there every year, even though this time, looking at the time table, I’d probably need it:

Anyway, all in all a nice-looking package and with only two movies to start the day it was a rather smooth introduction to what was to come.
Unlike past blog entries about film festivals, the following reviews will be kept rather short, as there are a LOT to cover and it’s maybe more interesting to give a short summary (read: short sentences, maybe only adjectives) than a full description of the plot development, characterizations and stuff. It’s not so easy either to write an awful lot with more than 40 movies due to time constraints. 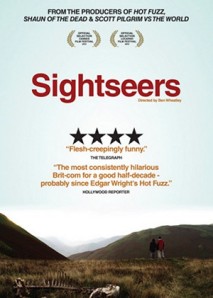 Slow-paced Natural Born Killers with rainy England countryside folks, but unique in its own way.
Disturbing and violent, but also very funny with the blackest humor since Black Adder or Four Lions, without Oliver Stone pointing his moral finger at the audience. Shocking and touching, believable characters and acting, fitting soundtrack and cinematography. Simply one of the best openers the Film Festival did in years. Have to watch Kill List by the same director if I get the chance. 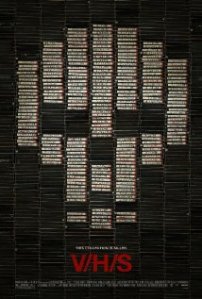 Interesting concept of using the shaky camera technique, but end result a mixed bag.
Frame story having some of the most unappealing characters, being pretty pointless in itself. First story too long with nothing interesting happening, twist nothing original. Second story more like a vacation video with horrible ending. Third story has same problem like first, even though the creature/killer is quite scary and fits the video technique. Fourth story is the most interesting with its reliance on the Skype video chat and has a pretty cool, open ending. Fifth is more or less a best-of Paranormal Activity, at least when it comes to the special effects. Again nothing really new or exciting. All in all the tapes discovered by those annoying characters would have better been left somewhere else than being promoted as the next big thing in horror. Horrible end credits as well which kind of promote violence as being cool (if it was meant ironically, the directors apparently missed their point).

Being an avid gamer, cinemaniac, and bookworm in addition to other things the internet and new media present, I'm also very much into DIY music, rock and pop in particular. Writing short or longer pieces about anything that interests me has always made me happy. As both an editor for German website "Adventure-Treff" and UK website "Future Sack", I like to write reviews and news about recent developments in the movies, games and book industry.
View all posts by nufafitc →
This entry was posted in Movies. Bookmark the permalink.