After a murder in an art gallery, hunting for a biblical painting turns out to be George’s and Nico’s greatest adventure yet.

Storytelling for suspense and laughs
Despite the missing link of the Templars conspiracy, the story revolving around biblical themes mixes fact and fiction rather nicely and again showcases Charles Cecil’s awareness that history is more than just a bunch of dusty old books. There’s enough mystery here to keep the player interested, while the historical explanations seldom outstay their welcome. 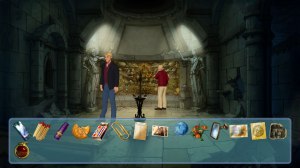 However, the plot takes a while to get going and except for some twists and turns plays it safe with inoffensive but sometimes forced humor and a few thriller elements, although the investigation and globe trotting almost hit the same soft spot the original did. Unfortunately, the ending feels rushed, and the main villain isn’t that intimidating either, which already hints at some problems with the script and characterizations.

Familiar and new faces
Conversations between George and Nico aren’t as witty as in the first two games, but their portrayals are much better realized than in the fourth game, while there are a few interesting NPCs to talk to as well. Unfortunately, characters from the past have nothing more than camoes. In the case of Lady Piemont, the high society dame who was so memorable in the original, they even turn out to be caricatures to be laughed at. This is too bad, because the more serious characters who tell their life stories, are very well written. 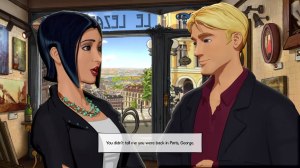 The problematic relationship between different points of views in religion is also an intriguing theme seldom highlighted in games, but at some points, the philosophical teachings stand in stark contrast to the humor of the game. Still, despite some flat characters and a story which is nothing particulary special in mystery novel terms, visiting new locations, meeting new people and unravelling more of the past is almost as much fun as in the other Broken Sword titles.

A game and story of two pieces and minds
It also has to be said that the game is best played and discussed as a whole, because the two-part structure only works to a certain degree. The first one ends on an unsatisfying more-questions-than-answers note, while the second one emphasizes the globe trotting and adventuring aspect more than the investigation and interrogation parts of the first one.

Going through the puzzle motions
The Broken Sword series always had its up and downs in puzzle design. Whereas the first one had too few and easy conundrums, the second one had too many and became more like Monkey Island, the third one did too much Sokoban-like block-pushing, and the fourth one was simply too obscure and bugged with hacker mini-games.

So it’s refreshing to see that the newest title almost hits the perfect balance between object-combinations, environmental interactions and logic puzzles. The game is at its best when one has to decipher manuscripts and does a fair bit of research. The mix of investigation and puzzle solving is on par with the first game, although there are a few exceptions which are extremely annoying.

One involves a weird music puzzle to convince a character to find spiritual peace with herself and another object-based puzzle where a police officer has to be moved from his post with the exploitation of his bladder problem. Using a rat to overcome a electrical circuit problem is also a ludicrous example. The difficulty of sometimes obscure, often logical, but also more elaborate puzzles can be adjusted to the player’s familiarity with the genre, as a very good step-by-step hint system helps to overcome each obstacle. 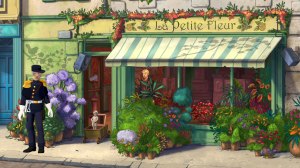 Old age looking good for the new age
Not only the gameplay and storytelling are true to the roots of the series, the graphics, voice acting and soundtrack also live up to the high standards of the original 2D adventures. Backgrounds are drawn with an attention to colorful detail, while the cutscenes are done extremely well with fluid animations. Unfortunately, the same can’t be said about the character animations, illustrated by 3D models which move slowly with few gestures and don’t fit very well into the 2D locations.

However, the voice actors do a tremendously good job (especially in the German version). Only the soundtrack is a bit disappointing. It’s not that it doesn’t offer memorable tunes, but most of these are taken directly from the first two games, and despite a few isolated instances, the score is sorely lacking in variety.

Kickstarter done right
Broken Sword 5: The Serpent’s Curse is a perfect example how a developer listened to their backers and delivers enough fan service to justify the money put into the Kickstarter project. The game succeeds in evoking nostalgic feelings about the series in a good way by presenting a mystery story mixed with a historical and religious touch on the surface and often genuinely fun and engaging puzzles underneath.

Unfortunately, storytelling suffers from the lack of genuine inventiveness and could have used some more suspense, while the characters remain flat as well with only a few instances when genuine emotion is shown. As it is, it remains a fun adventure game which stays true to the series’ mix of history and mystery and the genre in which it sits comfortably without being experimental.

Buy the iOS game on
the ITunes Store

Promotional trailer for the second episode:

Trailer for the iOS version of Episode 1:

Trailer for the Android version:

If you liked reading this article, make sure you pay a visit to Future Sack which kindly features it as well, and every Facebook LIKE or comment is appreciated :).