Prequels don’t have it easy when they tell an already known story, but Wadjet Eye Games’ Blackwell Unbound does things a bit differently. 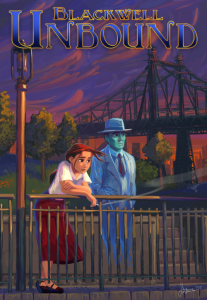 Rosa’s aunt Lauren Blackwell together with her ghostly companion Joey investigates the murder of a saxophone player and a woman who didn’t want to leave her home at a construction site, and discover a disturbing connection between these two.

What went before with things to come
This being a prequel, the writing does a remarkable job of keeping things fresh, as Rosangela’s aunt Lauren doesn’t have to deal with her surprising encounter with ghost Joey, but with her own sanity. Their dialogue scenes are just as witty, although it’s sometimes hard to sympathize with Joe’s rough behavior towards her. The main story lacks the same emotional impact the original had. It still deals with helping the departed realize their old life is gone and moving on, and tells about individual tragedies. Melancholy is present throughout, while some sentimental scenes with over-exposition are there as well. The plot has two main storylines which gel together quite nicely. It’s not too complicated and has a few unexpected twists and turns, while the inclusion of real life New Yorker newspaper editor Joseph Mitchell adds to the same sense of place the first game incorporated. 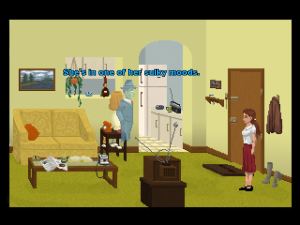 Lightly puzzling investigation
The gameplay hasn’t changed much with object-combinations being the exception, but in general the puzzles are better interwoven with the narrative. This time, there’s also another interesting mechanic introduced by the playable Joey who can directly talk to other ghosts and go through closed doors, so Lauren and he have to help each other out. A stronger emphasis on investigation is also felt throughout, even if typing in certain names in a phonebook is more cumbersome than enjoyable. A welcome return is the combination of clues. These are used like items in an inventory, making the player feel like a real investigator. Unfortunately the problem with these clues is that the player also feels quite lost at times because of the lack of hints or clues what to do next.

Familiar look and sound
Technically, the game almost looks the same as the first one with low-res graphics. It also has the same highs and lows in sound quality, i.e. mostly good voice acting, but also some unintentionally funny dramatic overacting, while what is said and what is shown in text form again differs in certain parts. A positive is the greatly improved soundtrack with even more memorable jazz tunes.

An enjoyable blast from the not so distant past
Prequels aren’t the easy to do, especially after only one title. So it’s surprising that Blackwell Unbound is almost as good as the original minus the surprise element. At least in gameplay terms it’s improved a fair bit with better puzzles and more investigative elements. Technically, it remains more or less the same with a retro art style not to everyone’s liking and low-budget sound, although the soundtrack is rather excellent. Despite a more complex narration, playtime is less than 2 hours (plus some bonus features like commentary and outtakes), making it a short trip down retro adventure land, but still highly recommended to those who want to know more about the Blackwell heritage in the grand scheme of things.

If you liked reading this article, make sure you pay a visit to Future Sack which kindly features it as well, and every Facebook LIKE or comment is appreciated :).
Using the GOG link and buying the product also helps ;).

Being an avid gamer, cinemaniac, and bookworm in addition to other things the internet and new media present, I'm also very much into DIY music, rock and pop in particular. Writing short or longer pieces about anything that interests me has always made me happy. As both an editor for German website "Adventure-Treff" and UK website "Future Sack", I like to write reviews and news about recent developments in the movies, games and book industry.
View all posts by nufafitc →
This entry was posted in Game reviews, Gaming and tagged Blackwell, Blackwell Unbound, Joseph Mitchell, Lauren Blackwell, Wadjet Eye Games. Bookmark the permalink.