Nintendo published a free-to-play puzzle game that works like Pokémon Link: Battle, but brings aspects of mobile gaming to the 3DS. 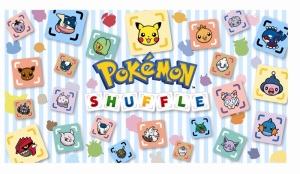 Pokémon Crush Saga
The first necessary step is to associate your Nintendo Network ID with the game, which makes you sceptical right from the start.

Generally, you match three Pokémon heads to have a row and increase your score, so you catch another wild Pokémon. After a successful fight, you gain coins to buy power-ups, extra turns or more EXP. The caught Pokémons can be trained and carried as your team, so there is still a bit of RPG in this mobile game. It gets more complex after each stage, because turns are limited demanding some strategy.

The illustrations are those of a typical Pokémon game and fans will like it, because you play with Bulbasaur and Charmander. The sense of unity that Nintendo established with the help of multiplayer-gaming and events is felt here as well, because several features are planned for the future. For example, one could catch Mew from February 18th until March 9th, 2015 or one can still collect a lot of coins from February 21st until March 16th, 2015. 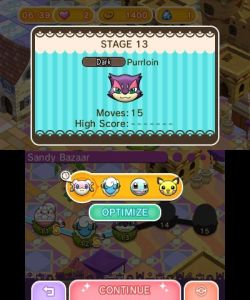 Being influenced by mobile casual games, the presentation of the game is also quite rudimentary with music that could be heard during an elevator ride or in a shopping mall, while the graphics are similar to Pokémon Link: Battle, although the map is in 3D. 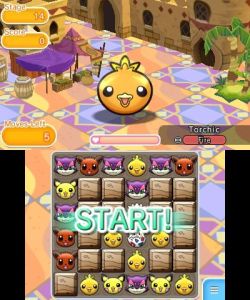 Pay-to-shuffle
Every fight you start costs a “heart”. The heart will refresh after 30 minutes. If you do not want to wait, you can purchase a “jewel” with real money, which enables you to buy five hearts. This is the same idea games like Candy Crush Saga are based on. Consequently, the user must choose between waiting or buying. The coins can be bought as well of course…

The problem is that this is not Nintendo like I expect it to be.

Nintendo made wonderful games, especially Pokémon titles, because it captivated a whole generation. Seemingly, the next gen of mobile gamers is used to in-app purchases when you think of success stories like FarmVille, Angry Birds and co.. These games can be great fun, but I think the purchases are problematic for younger players.

Finally, where does Nintendo want to go? After the introduction of DLC in games like Mario Kart 8, I can imagine that in-game purchases will sadly be Nintendo’s next step in marketing.

Get the free 3DS game on
the Nintendo eShop

If you liked reading this article, make sure you pay a visit to Future Sack which kindly features it as well, and every LIKE or comment is appreciated on EMR’s Facebook page or FS’s Facebook page :).

Being an avid gamer, cinemaniac, and bookworm in addition to other things the internet and new media present, I'm also very much into DIY music, rock and pop in particular. Writing short or longer pieces about anything that interests me has always made me happy. As both an editor for German website "Adventure-Treff" and UK website "Future Sack", I like to write reviews and news about recent developments in the movies, games and book industry.
View all posts by nufafitc →
This entry was posted in Game reviews, Gaming and tagged 3DS, Angry Birds, Candy Crush Saga, console, F2P, FarmVille, free game, free-to-play, Genius Sonority, handheld, mobile gaming, Nintendo, pay-to-win, Pokémon, Pokémon Link: Battle, Pokémon Shuffle, Pokemon Link, RPG. Bookmark the permalink.