The world’s climate has been changing for years, and even if there are worst case scenarios elsewhere, on Tuesday, March 31 2015, things got a bit out of hand in North Rhine-Westphalia, Germany, especially for people on trains.

It’s not often that a storm can stop an entire transportation system. But this is what happened with the Deutsche Bahn (German Train) company announcing that from 11 am no trains would be running ALL DAY LONG in the whole of NRW, and that’s a very large area. They were as unprepared for the weather condition as passengers were annoyed and disappointed how it was handled.

People were pretty much stuck where they were, so those who had to go from uni/work back home, either had to find someone with a car or use a 2 1/2 hours ride by bus instead of half an hour. For those coming to work later than 11 it was either call it a day or try other ways to get where they wanted to be. Of course people travelling or having an NRW ticket for the whole day were pretty much left alone as well.

Now the question is: Was this necessary? Apparently for security reasons, the German train company decided it was. But it’s not that bad weather didn’t happen before… and trains were still running. Despite single damages in my area (with a rooftop taken clean off a supermarket), I have to say that I didn’t find the storm that heavy, compared to others last summer. Actually, there was more sunshine than the last couple of days, and I wasn’t the only one thinking like that, as this hobby jogger proved (although you never know with people like this wearing not much and running through rain and storm just to keep “healthy”).

So yes, I can see why one wants to be on the safe side, but then again what about the people who were clearly stuck and didn’t have the means of another transportation system? Sorry, but this was a really bad move and with so many strikes going on in the past because of the GDL, using trains becomes more and more a risk and not the “easy and good for the environment” system it should be. Who doesn’t say that a storm like this will happen again or that the damage it did on the tracks wouldn’t make the next day(s) just as impossible (as they already did with delays)? 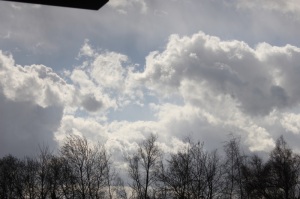 Some preventive methods have to be applied, yes. But not by simply forgetting about the people who depend on the trains. If the climate continues to change the weather for the worse (and it certainly will, as things and people don’t improve), then maybe we won’t need trains anymore if they simply don’t feel safe to use anymore.

Being an avid gamer, cinemaniac, and bookworm in addition to other things the internet and new media present, I'm also very much into DIY music, rock and pop in particular. Writing short or longer pieces about anything that interests me has always made me happy. As both an editor for German website "Adventure-Treff" and UK website "Future Sack", I like to write reviews and news about recent developments in the movies, games and book industry.
View all posts by nufafitc →
This entry was posted in News and tagged catastrophy, damage, destruction, Deutsche Bahn, Germany, nature, North Rhine-Westphalia, NRW, rain, storm, train, transportation. Bookmark the permalink.