A new trailer with a mix of past gameplay videos but with more structure has been released by CD Projekt RED for its upcoming RPG The Witcher 3: Wild Hunt.

I know the past blog entries have been populated by news and a review for this RPG series, but I still hope that this won’t leave the wrong impression of PR hype. Yes, I’m still pretty hyped about this game, not because it looks amazing (which it does) and is promoted to be the most anticipated title of the year.

The reason for this coverage is that the world shown in the trailer is just believable and unique enough to stick out of the RPG crowd. The Dragon Age games or anything else Bioware put out and will release are all well and good. But personally I’m more excited about the third adventure of Geralt who adheres to his own agendas. 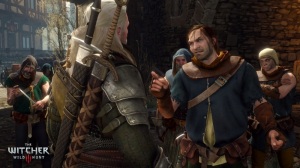 It’s also refreshing to see that the f-word found its way back to “high fantasy”. This might sound superficial, but compared to the censored first game in which language was clearly made less offensive, it’s great to hear an honest voice acting. Hopefully, the use of swear words won’t be too much, i.e. used just for the sake of sounding hip in a videogame world where f-bombs are constantly dropped.

But back again to the trailer, the mix of mature themes like racism already established in the first game I’m currently playing and some very violent battles where limbs and heads are lopped off, traversing the vast world of The Witcher 3 seems to be just as exciting as looking at the landscapes (a particular highlight being the sundowns). Gameplay-wise, the game doesn’t seem to try anything original, but improves on the formula of meaningful decision-making, strategic but action-heavy fighting, and many quests to take on. So see for yourself if this trailer makes you want to pre-order, buy the game later or just keep it on your radar, awaiting reviews (mine hopefully coming up as well if time and hardware allow).

Being an avid gamer, cinemaniac, and bookworm in addition to other things the internet and new media present, I'm also very much into DIY music, rock and pop in particular. Writing short or longer pieces about anything that interests me has always made me happy. As both an editor for German website "Adventure-Treff" and UK website "Future Sack", I like to write reviews and news about recent developments in the movies, games and book industry.
View all posts by nufafitc →
This entry was posted in Gaming and tagged action, Bioware, CD Projekt RED, Dragon Age, GOG, Good Old Games, PC, PS4, RPG, The Witcher, The Witcher 3, trailer, Wild Hunt, Xbox One. Bookmark the permalink.