Access Games‘ adventure game D4: Dark Dreams Don’t Die – Season One was already released almost a year ago as an Xbox One exclusive, but it’s now out on PC as well.

With the involvement of Hidetaka “SWERY” Suehiro who did the completely bonkers Deadly Premonition, this title stands out from the crowd. For those of you who haven’t heard of the debut game, it was an Xbox 360 exclusive and was then ported to PS3 and PC as a Director’s Cut. Unfortunately, the latter suffered from crashes, incompatible gamepads and other problems. That’s the reason why I haven’t reviewed this version yet, as it simply didn’t work on my PC, although I enjoyed the original console game. As it seems, the PC version of D4: Dark Dreams Don’t Die doesn’t struggle with these issues with only a few framerate hiccups. 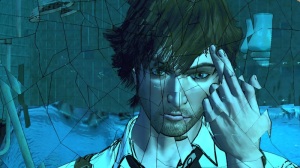 But enough babbling about technical stuff. The real reason why anyone who doesn’t have a console should check this out is how uniquely insane the gameplay and presentation is. Being a weird showcase of Kinect, it might lose something in the translation from eye-tracking movements to simple mouse controls, but the weird proceedings on screen are still intact. Whoever thought that Heavy Rain was the death of adventure games because of the reliance on quick time events, will surely have a hard time with this, as it’s full of them. Controlling the main protagonist is also kept to a minimum with the first-person perspective only requiring to point and click at objects or NPCs, although knowing the developer’s previous work, there’s still some investigative skills required. 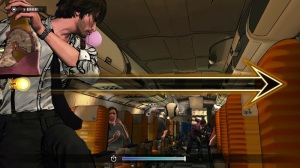 If this all sounds like a game without much interactivity, then suffice to say that Deadly Premonition had some horrible gameplay and not-so-great graphics. But the quirky characters made it an unforgettable experience. Just watching the trailer with its over-the-top action where dying is just as much fun with slapstick, offbeat humor, and out-of-this-world characters (the main character living together with a woman who behaves like a cat, how can you beat that?) makes the game worth experiencing. The plot about time travel in order to undo the murder of the protagonist’s wife might sound like serious stuff, but knowing Deadly Premonition with its many crazy twists and turns, this shouldn’t keep you from enjoying a short trip into Japanese madness. 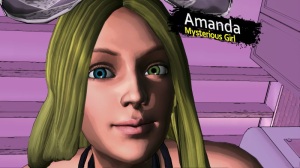 The game is available on both Steam and GOG with a 10% discount ending tomorrow, TFriday, June 12, at 10:59 PM GMT (at least for the GOG version).

Being an avid gamer, cinemaniac, and bookworm in addition to other things the internet and new media present, I'm also very much into DIY music, rock and pop in particular. Writing short or longer pieces about anything that interests me has always made me happy. As both an editor for German website "Adventure-Treff" and UK website "Future Sack", I like to write reviews and news about recent developments in the movies, games and book industry.
View all posts by nufafitc →
This entry was posted in Game release news, Gaming and tagged Access Games, adventure game, D4: Dark Dreams Don’t Die – Season One, Deadly Premonition, GOG, Good Old Games, Heavy Rain, Japanese, point-and-click adventure, quirky, time-travel. Bookmark the permalink.