Theme parks are a great way to escape reality, but what happens if that everyday reality is part of the experience, like in Banksy’s Dismaland?

It’s a kind of fake magic
I’m a big fan of theme parks, so the above statement of escaping reality isn’t meant in a derogatory way. But sometimes the way these parks are built and how shows are presented in a perfectly clean way makes you wonder what would happen if someone turned the whole concept upside down and concentrated on decay and destruction which came from neglect or simple disorganization.

Modern artsy-fartsy
I’m not really a promoter of modern art, as a lot of it seems to be provocative just for the sake of it. But Dismaland is something different from what some artists with a big ego come up with. British street artist Banksy really went crazy this time and ironically made one of the most popular unpopular theme parks almost everyone can afford to go to.

Non-entertainment comes at a price
With a small entry price of just 3 pounds but since its opening sold out on a regular basis, Dismaland, which is located at the seafront of Weston-super-Mare (Marine Parade BS23 1BE), offers attractions and employees which and who are both sad and almost made to break down. What this means is that security is staged as being completely bored or nonsensical, while the rides are either not accessible (like a Ferris wheel that goes upside down), weirdly nauseating (a van you have to roll around outside, while you sit on a swing-like construction inside) or simply sculptures and animated movies which make you wonder what they all mean (as a cartoon portraying popular characters constantly changing, starting with an image of Hitler). Even sitting areas are crooked and unusable. 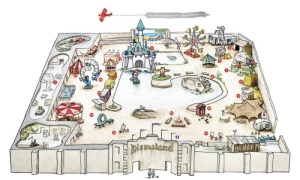 Maybe the most disturbing thing about the park is that the structures are built upon certain pop culture references or political and social commentaries, with the high(low)light being Cinderella’s coach that had an accident with all its occupants strewn about and paparazzi flashlights turning it into a macabre scene that is reminiscent of Lady Di’s death.

Sure, this is all rather provocative, but it’s all delivered with a sense of (very dark) humor. Discussing all the individual pieces would take too long and as I haven’t been able to go there myself, it’s also a bit pointless. Suffice to say that this is an awesome idea of having interactive entertainment and art combined, although it’s questionable how much entertainment people will find when water gun shooting miniature refugee boats.

Interactive depression and laughter
Now this is obviously no place for children or people who only like the sugar sweet parts of life, and I have to confess that without this sense of wicked humor and/or twisted ideas, this would just be another sad excuse for artists showing off, showing how bad everything in the world is. Rest assured that there are some parts which do exactly this sort of thing that so many art critics seem to love: holding a mirror of life to your face until you choke on it. But then again, the entry price isn’t too steep and there are far worse art exhibitions which are boring to death and usually show everyday furniture in different colors or paintings with… dots or something…smelly. 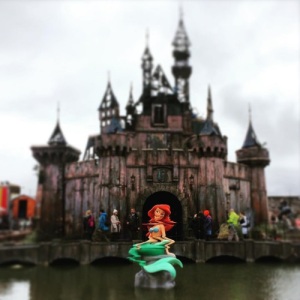 The irony of all the merchandise and promotion
It’s quite ironic that people who tried to order tickets online couldn’t because of server breakdowns, thinking this was part of the (dismal) experience. There are even (very expensive) T-shirts available for purchase, making this bemusement park containing “uneven floor surfaces, extensive use of strobe lighting, imagery unsuitable for small children and swearing” (quote from the website) even weirder. The media also cover the place as if it was a really popular theme park. And trying to take pictures of the paparazzi taking pictures of Cinderella’s coach… Well, that’s a whole new level of irony.

What does the big mouse say?
Another weird thing is that Disney lawyers aren’t all over the place. Even if it says on the website that “legal representatives of the Walt Disney Corporation” are prohibited from entering the premises (in addition to “spray paint, marker pens, knives”), this should have drawn quite some attention from the legal department, especially since employees wear Mickey Mouse-hats… In an interview with Banksy (you can read in the park’s website section) he stated that he doesn’t have anything against the company in particular, but it still stands to discussion why there are so many landmarks like a decrepit castle in the middle and a fuzzy version of the little mermaid…

For more info (and the dates of live music/comedy performances), please visit Dismaland’s official website and make sure to check out this great trailer so that you know what to expect:

Being an avid gamer, cinemaniac, and bookworm in addition to other things the internet and new media present, I'm also very much into DIY music, rock and pop in particular. Writing short or longer pieces about anything that interests me has always made me happy. As both an editor for German website "Adventure-Treff" and UK website "Future Sack", I like to write reviews and news about recent developments in the movies, games and book industry.
View all posts by nufafitc →
This entry was posted in Theme Parks and tagged art, Banksy, cinderella, Dismaland, Disney, Disneyland, exhibition, Ladi Di, little mermaid, modern, social commentary, Theme Park. Bookmark the permalink.