With so many indie releases and big publishers being added to the library, one often forgets that GOG started out as a platform for bringing back classic gaming to the digital market. So it’s great to see first-person adventure game Starship Titanic finally being made available on Good Old Games.

Writer Douglas Adams was for science-fiction what Terry Pratchett was for fantasy: an author who made fun of the genre and society or the human condition. But despite some text adventures, a really big breakthrough never came (unlike the Discworld adventure games). One particular title got lost in the process of adapting his ideas and stories was The Digital Village’s Starship Titanic. It tells the story of a malfunctioning and dysfunctional ship that picks up a stranger from earth who has to find out what the mysteries on each floor are. 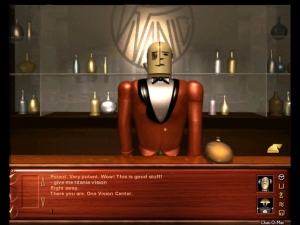 If all this sounds strange, it’s because the game is. While Terry Pratchett never really got involved in the actual process of making the games based on his world, Douglas Adams did here with game design and character creation. So the humor should remain intact. Unfortunately, gameplay-wise it seems to be on vogue with the Myst series, as these types of games were quite popular back in the days, i.e. first-person step-by-step navigation and obscure puzzles. 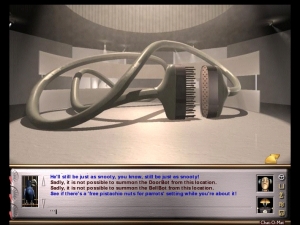 However, considering that the game is very rare in its retail version and fetches high prices, GOG should be applauded for bringing this back into the memories of old and new gamers alike. Gameplay and graphics might not stand the test of time, but Douglas Adams’ writing most probably will.

Buy the PC game on
GOG

Being an avid gamer, cinemaniac, and bookworm in addition to other things the internet and new media present, I'm also very much into DIY music, rock and pop in particular. Writing short or longer pieces about anything that interests me has always made me happy. As both an editor for German website "Adventure-Treff" and UK website "Future Sack", I like to write reviews and news about recent developments in the movies, games and book industry.
View all posts by nufafitc →
This entry was posted in Game release news, Gaming and tagged adventure game, classic, Discworld, Douglas Adams, DRM-free, fantasy, gaming, GOG, Good Old Games, humor, Myst, point-and-click adventure, puzzles, satire, Starship Titanic, Terry Pratchett, The Digital Village. Bookmark the permalink.