Of course the often cited Halloween series isn’t the only example of horror movies paying tribute to the season of the witch. We’ll prepare ourselves for the end of the movie madness week with the home invasion thriller Mischief Night that fittingly takes place the night before Halloween. 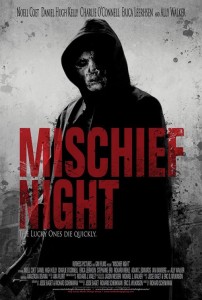 Young Emily suffering from psychosomatic blindness finds herself home alone on the night before Halloween, and Mischief Night, the night when pranks are played, turns out to be very bloody when her home is invaded by a stranger.

The setup is quite thrilling, even if it isn’t particularly new in its individual parts. Men in masks who invade a home have been seen in You’re Next, blind victims being stalked by maniacs… somewhere else. The Halloween theme is also not as present as would be expected, mainly because there aren’t any jack o’lanterns or scary decorations, which is a shame, because it would definitely have benefited the atmosphere. 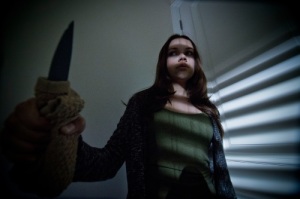 The movie can also be categorized as less horror, but more thriller with drama elements. However, the mix works surprisingly well, which is mainly due to the good performances of the lead actress and (unlike many horror movies) the identification with her character. Even if the movie takes some time for introducing its characters, the second half is quite suspenseful and also pretty violent in certain scenes.

There isn’t much of a plot to follow, and the assailants remain enigmatic. But the way how the young girl’s backstory is revealed, how her sessions with her psychiatrist are later added is quite deep for the home invasion genre. The dialogue scenes with the rest of the cast aren’t as engaging as the thrilling moments and could have been cut short, though. So what remains is a movie that’s not really suitable for the Halloween atmosphere, but is still stylistically well made and entertaining to watch. If it had more original ideas and less talk, it would even have surpassed the forced coolness of You’re Next.

If you liked reading this article, make sure you pay a visit to Future Sack which kindly features it as well, and every LIKE or comment is appreciated on EMR’s Facebook page or FS’s Facebook page :). Or FOLLOW the blog on EMR’s Twitter page.
Using the Amazon link and buying the product also helps ;).

Being an avid gamer, cinemaniac, and bookworm in addition to other things the internet and new media present, I'm also very much into DIY music, rock and pop in particular. Writing short or longer pieces about anything that interests me has always made me happy. As both an editor for German website "Adventure-Treff" and UK website "Future Sack", I like to write reviews and news about recent developments in the movies, games and book industry.
View all posts by nufafitc →
This entry was posted in Movie reviews, Movies and tagged All Hallows' Eve, blind, blindness, blood, drama, gore, guts, Halloween, home invasion, horror, Image Entertainment, indie, Meteor Film, Mischief Night, Richard Schenkman, Ruthless Pictures, Second Sight, thriller, You're Next. Bookmark the permalink.