Remakes are difficult to do, especially when it comes to gaming. So does Pinkerton Road’s Gabriel Knight: Sins of the Fathers – 20th Anniversary Edition have enough new content and stay true to the original point-and-click adventure, while also being a good transition from old to new games for our Halloween gaming special week?

Same old good story
As the original game by Jane Jensen has already been [reviewed in full detail] before, this article will just be about the changes and differences, not the storytelling or identical puzzles. It will also be about how the new presentation keeps the original spirit and if the game can still compete with contemporary (remake) adventures.

Story and dialogue scenes are almost identical to the original, but there are a few cutscenes and additional comic book-like close-ups that weren’t there. Fortunately, these fit and in some cases make the scenes even more interesting and suspenseful. Those who are familiar with all the twists and turns won’t see anything changing the main plot or character development, though.

Same old gameplay with a fresh touch
However, the gameplay shows some welcome changes. Topics of conversations relevant to progress in the story are highlighted, making it easier to skip long dialogues if one already knows them from the original or if one doesn’t have the patience to listen to the (well-written) life stories of NPCs. Already chosen topics also disappear, so going through them accidentally is a thing of the past. Even better is the way how locations are progressively unlocked, so that one doesn’t fall into the trap of going to places where interaction isn’t possible. This might make the game seem more linear, but it also makes it easier to follow the story without checking locations which will only be important much later in the game.

The addition of a hotspot key makes it easier to find points of interaction or items to pick up, although this is less of a problem with the newer graphics than it was with the pixellated look of old. Sometimes the screen can also be cluttered with descriptions, or the foreground of a close-up and the background of a scene get mixed up. So in some cases it’s better not to use this help system.

Same old puzzles and problems in a new light
A journal keeps track of current goals and gives clues, although these are often as unclear as the puzzles themselves. It would have made the game more accessible for new players if a helping hand would be given in some puzzles, like deciphering and applying the drum code. The remake actually introduces a few problems the original didn’t have as well. The inventory system is way too cumbersome and counterproductive, e.g. when trying to look at an object, two mouse clicks are necessary. Collision detection isn’t great either, e.g. when one has to make a pantomime follow Gabriel and it becomes a battle with step-by-step clicks to evade other people, something that makes the puzzle unnecessarily difficult to solve.

A few new conundrums fit rather nicely without deviating too much from the overall nostalgic experience, although none is really necessary or memorable. It’s the small details which can be found to enhance the game, though, like a more comfortable map and reading the newspaper each morning while actually looking at the page rather than just having the narrator read it out.

Same old Gabriel with a new voice and look?
Speaking of reading out, the narrator’s voice is just as annoying (if not more so because of the slow reading) as in the original and can luckily be turned off again. It’s only too bad that Gabriel isn’t voiced with the same gusto as Tim Curry did it. After a while one gets used to it, but it’s not a very charismatic one. The same holds true for Gabriel’s detective friend Mosley who just sounds rather boring. However, the rest (except for single instances) does a good job, especially Grace Nakimura sounds just right, if not better than the original. Unfortunately, there are some dialogue scenes where sentences are broken off, something which wouldn’t have happened with a bit more QA-testing. Then again the music is just as great as in the original, being both faithful and varied, although there are some scenes in which it simply doesn’t fit, e.g. being too bombastic and fast in an interrogation scene.

Graphically, the game is a big improvement over the sometimes indistinguishable backgrounds of old. All of them are lovely drawn with impressive lighting. Despite losing some of the washed out, dark and broody atmosphere, these bright locations are so detailed that it’s a joy to visit them. The cutscenes are also very good, staying true to the original visual novel look, but including more details and replacing outdated morph sequences. However, it would have been better to use a different character animation engine, as the movements are shaky and make certain scenes quite ridiculous. Character proportions aren’t always right, either, when compared to the locations they stand in.

A comic book look back into the past and future
A visual novel on the title screen tells the backstory, something a comic the original came with also did. Unfortunately, this one goes much further and spoils many parts the player should discover for himself. It’s a nice addition, but it would have been a better idea to have the first part ready at the start and the rest after getting past certain segments in the story. Navigating through the pages is also not very user-friendly, because the pages are not shown in their entirety, but have to be scrolled down. Something like panel-by-panel navigation would have been better.

Writing about comic books, Jane Jensen also wrote a short story titled The Temptation that continues after the third game. So for those of you who’ve already played the original trilogy, it might be worth checking out, as it’s available for free. It was also turned into a 3 part-comic book 3 part-comic book that looks quite excellent and is available for free download as well. Others should wait a bit, because both obviously contain spoilers. 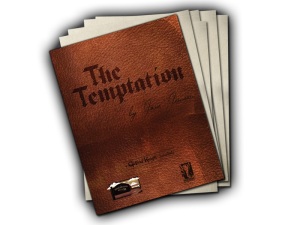 Same old classic dusted off or re-imagined?
Gabriel Knight: Sins of the Fathers – 20th Anniversary Edition is a faithful remake with some lovely art direction and additional modern features to help newcomers. Those unfamiliar with the original or who simply can’t get over the pixel graphics, will experience the same compelling story and believable characters Jane Jensen created two decades ago. But they will also face new problems and not so great voice acting or animations.

The question of any remake remains: Is it really necessary and can it compete with contemporary adventure games? The first question isn’t easy to answer, because except for a few additional puzzles, it’s exactly the same game people so fondly remember, and this also means that the obscure puzzles will likely cause frustration. But as it stands, Pinkerton Road delivers on the nostalgic goods and makes the game relevant again for a new audience to discover, encouraging them to play the two original sequels as well.

Buy the mobile game on
the iTunes store
Google play

Being an avid gamer, cinemaniac, and bookworm in addition to other things the internet and new media present, I'm also very much into DIY music, rock and pop in particular. Writing short or longer pieces about anything that interests me has always made me happy. As both an editor for German website "Adventure-Treff" and UK website "Future Sack", I like to write reviews and news about recent developments in the movies, games and book industry.
View all posts by nufafitc →
This entry was posted in Game reviews, Gaming and tagged adventure game, Angel Heart, Anniversary Edition, cinema, cinematic, classic gaming, DRM-free, fiction, Gabriel Knight, GOG, Good Old Games, history, horror, Jane Jensen, mature, mystery, Phoenix Online Studios, Pinkerton Road, point-and-click adventure, puzzles, remake, Sierra, Sierra On-Line, Sins of the Father, storytelling, thriller, Voodoo. Bookmark the permalink.