Point-and-click adventure games rarely tread the scary ground survival horror games have trampled for years, so does THE BROTHERHOOD‘s STASIS deliver the scares and thrills of real sci-fi horror, and is it a fitting preparation for our final Halloween gaming special week review? 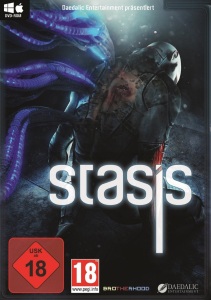 John Maracheck wakes up in the apparently abandoned, obviously very dilapidated space station Groomlake and has to find his missing wife and daughter.

No one hears you scream these stories
Things start out pretty atmospheric. After just being woken up from a stasis slumber, the player is as clueless as the main protagonist. The fear of what happened on the spaceship and what it means to survive its monstrosities is tangible and reminiscent of the Dead Space series. Soon another survivor gives Maracheck instructions and advice, something which happened in the series as well. Then there’s a mad scientist who is randomly heard via intercom. Again nothing very original. Finally creatures crawl around, while dead people litter the floors of the space station, with blood and guts galore. 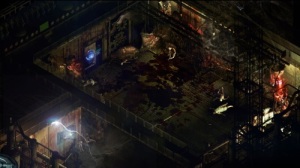 While this sounds all rather standard survival horror and the way the background story is told in reading neverending PDA entries, it’s because it is pretty uninspired. Inspired by movies like Alien and Event Horizon is one thing, but borrowing ideas like traveling through various parts of the ship by a modern railway or later using a plasma cutter as in Dead Space for one puzzle is simply too much. Of course the main idea of failed experiments (what else could there be?) has been done to death in games, and it feels overdone here, as are the PDA entries. What is particularly strange is that reading them isn’t necessary to progress in the game, and if one gets tired of reading the endless passages of text (as well-written as some are), there’s actually very little story progression or even suspense. 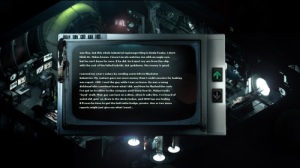 Talking and reading through the scary motions and faked emotions
This is a shame, because environmental storytelling of the various locations of the ship is quite good, with often detailed descriptions of many objects, although most of them aren’t necessary to interact with. If there would be more to the story than the same old science-gone-bad message with characters one can relate to, then the ship would have been a great addition to the atmosphere. Unfortunately, Marachek remains a faceless, unlikable character for the most part, while his interaction with his intercom-panion remains rather superficial.
Dialogues are often too long (with some unnecessary swearing) and, in case of the dangers of scientific experiments, feel as a contrived humanitarian message. There isn’t anything wrong about this ideal, but a subtler approach would have worked for both character and story development. It’s too bad that the background story of the space station/company founder is only told in the last section of the game. With the use of museum recordings, this illustrates how the constant stream of PDA entries could have been replaced with something more engaging. 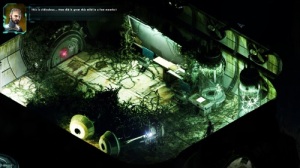 If you expect the tension promised in the trailer, you’ll be disappointed. There are only very few scenes which infuse any kind of fingernail-biting horror or action. Sure, it’s more psychological horror, but except for an excellently done surgery scene and some carefully set jumpscares, there isn’t much to keep players interested who are familiar with the Dead Space franchise. Now, comparing a point-and-click adventure game to a survival horror third-person action-adventure might seem unfair, but if the presentation in addition to some story elements are as obvious as here, the question is if the genre is really suitable to convey this type of atmosphere. The PDAs are again a lazy attempt to flesh out characters one only sees lying around in various states of dismemberment.
And again both the writing and depiction of violence is problematic. While the background stories of some employees of the space station are interesting, there are way too many to keep track of or care about. When they finally fit together (as when reading from different points of views), the player isn’t any wiser. Showing bloody scenes of violence is one thing, and in some movies and games it works just fine, but here it comes across as gratuitous, carrying over to the puzzle design as well. 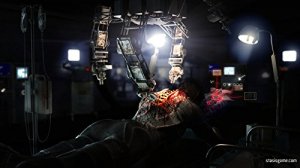 Puzzling thoughts and stranger innuendos
Puzzles are usually well integrated into the gameplay with smaller and bigger obstacles to overcome. Their solutions are also usually logical and even for beginners easy to see through. They’re not really original or memorable, but they’re not so frustrating, either. At least most of them. Some require a bit of backtracking and some annoying pixel hunting, as there isn’t any hotspot key. The lack of useful comments on objects in the inventory or the use on the environment is another oversight not even the worst of point-and-clickers would allow. It’s also disappointing that despite such a big space station, the game is very linear and doesn’t invite for exploration or experimentation. It would have been interesting to have puzzles on various parts of it, something that’s only done for a very short time at the end of the game when going from one level to the next by elevator.
The way bodies are dismembered in order to solve certain puzzles becomes both repetitive and gratuitous. It’s one thing to do this once and Marachek becoming disgusted, but it’s quite another thing to do it multiple times and him also getting violent. Unfortunately there are also scenes in which he can die, and unlike in survival horror games, some situations can’t be avoided at first, e.g. when turret guns mow him down. Even worse is the savegame function. Automatic checkpoints are created, but if one saves after them, one starts from the checkpoint anyway, making reloading an unnecessary way to avoid unskippable dialogue scenes.

Looks and sounds can be deceiving(ly good)
If gameplay and storytelling aren’t impressive, what one see and hears certainly is. The isometric perspective is rarely used in classic point-and-clickers like in Sanitarium, so it’s great to see it return here. Environments are very detailed and even if the animations can’t keep up (with some annoying collision detection), the realistic lighting, water, or steam effects more than make up for it. Cutscenes with some great CGI also look more like AAA-material than what one would expect from an indie developer.
Even better is the incredible sound design that has creepy background noises, a varied soundtrack and solid voice acting. The latter ranges from often convincing, but also some forced emotional outbursts. It’s also a bit disappointing that some locations have videos or audio recordings from the facility which don’t carry over to the next room, making transitions abrupt. However, despite these minor problems, the game wouldn’t deliver the jumpscares or more subtle horror scenes without this impressive technology. 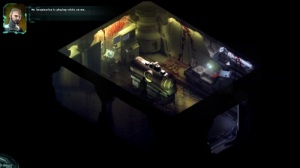 A failed experiment of a game with some merits
It’s always difficult for a point-and-click adventure game to create the same sense of dread as survival horror titles. STASIS certainly tries it with its visuals and audio, making it engaging on a superficial level. Unfortunately, there’s a difference between well-done with good intentions and the actual final product when it comes to storytelling. Despite a background story and characters who have potential, the plot itself moves at such a slow pace that it’s difficult to really care about the protagonists’ plight or the general message of the game.

Even if one neglects the unoriginal story and bland characters, gameplay doesn’t make up for it. Puzzles are nicely interwoven in the fabric of the game, but they’re nothing to write home about, while a few frustrating moments annoy as well. The game isn’t bad per se, it’s just highly derivative and unoriginal, borrowing from classic sci-fi horror movies and games without leaving a lasting impression. This is too bad, because atmospherically, this would have made for a great mix of survival horror and point-and-click adventure.