The original action-adventure Darksiders II from now defunct Vigil Games is almost 3 years old, but Gunfire Games breathes new life into it with the recent release of the PC version.

It seems like ages since I played the original Darksiders on PS3. While I really enjoyed it, I’ve never come around playing its sequel, which is strange, because I wanted to know how the story of Death, one of the Four Horsemen of the Apocalypse, played out. It might have borrowed a lot from God of War fighting and Zelda puzzle mechanics, but with the comic book aesthetics and high production values, this was still a great game.

Now might be the perfect opportunity to both revisit the old version on PC and then play the Deathinitive Edition of its successor which seems to be the best one available, with some nice extra features for PC users. It includes all DLCs, an improved graphics engine with better lighting and shadow effects, reworked level, character and environmental graphics, and 1080p or even 4K resolution. In addition, the distribution of loot is also refined. 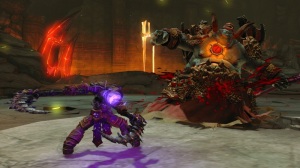 The first game was highly underrated and tremendous fun, so if you can live with games borrowing heavily from other titles, while having a more brutal presentation, the sequel might just be the next best thing, and with this new edition, PC users will have another reason to experience it, although at the time of writing, there seem to be crashes and bugs preventing people to really enjoy it, so hopefully these will be fixed soon. The console versions don’t seem to suffer from these problems, though.

Darksiders II – Deathinitive Edition is also part of the Nordic Franchise Loyalty Program (NFLP) with the publisher offering consumer-friendly deals. Everyone who owns Darksiders, Darksiders II, and the DLC pack on GOG (or Steam) up until the release of Darksiders II Deathinitive Edition on November 5th 2015, will get the Deathinitive Edition for free. Everyone who owns Darksiders II from GOG (or Steam) before November 5th 2015 will get an 80% discount during the first release week. Anyone who doesn’t own the game(s), will have a release discount of 20% until November 12, 5:59 PM GMT. Of course the game has been out for almost a week, so this news might come a bit late. However, the discount is still available until tomorrow, and Nordic Games’ NFLP is a great gesture, hopefully finding application in future titles.