With so many games to review and after having covered the GOG Big Fall Sale that recently finished with many titles on the wishlist, it’s easy to forget that more titles were added to the catalogue, one of them (also being featured in the sale) being Upper One Games‘ Never Alone in its Arctic Collection.

Never Alone is a unique experience about traditional lore by the Iñupiat people, created with Alaska Native storytellers and elders. It’s called a new genre: the “world games” which should be concerned with real life culture stories. An intriguing concept, and there’s also a great game attached to the educational purpose. 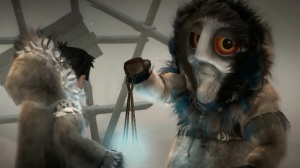 The player (or players, as it has local co-op play as well) controls a young Iñupiaq girl and her arctic fox companion who embark on a journey in order to find out the source of a blizzard that threatens their world. While the game plays like a puzzle-platformer, it also unlocks videos in which elders, storytellers, and other members of the Alaska Native community share their experiences. This isn’t only a great concept, as the art direction and sound design also fit perfectly. It simply looks gorgeous with a mixture of cartoon and engraving styles, while the music and sound effects make it a realistic representation of the ice-covered landscape.

With winter knocking at the door, it might be a great time to experience this game, especially since it’s now available DRM-free on GOG. In addition to the main game, the DLC Foxtales as well as the soundtrack are included in the Arctic Collection. But make sure that your PC is strong enough to handle the game. Otherwise there are still the console versions for Xbox One, PS4, Wii U and the Android version. Playing it with a friend or family member might also be the perfect way to experience this, as it’s both educational and casual gamer-friendly.

Buy the Xbox One game on
the Xbox store

Buy the PS4 game on
the PSN store

Buy the Wii U game on
Nintendo eShop