With more and more games being reviewed and recently released titles being covered, there are of course many others still in production and announced. After discussing the The Witcher 3: Wild Hunt epic trailer, Level-5‘s RPG Ni No Kuni II: Revenant Kingdom is the next big thing to watch. 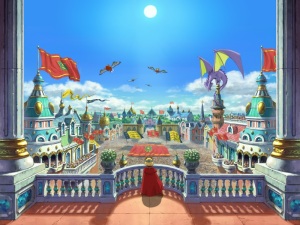 It’s no secret that I’m not a big fan of JRPGs. Even if I tried quite a few and finished most Final Fantasy titles, none have actually been reviewed, as I always found adventure games or other genres more interesting to write about. Not being very fond of the anime style also meant that movies have received the same treatment. However, as an enthusiastic Studio Ghibli fan (no fanboy, as there are also a few movies not worth watching), I liked playing the original Ni no Kuni: Wrath of the White Witch, if only for a short while. This was in no small part due to the amazingly detailed world and animated movie-style, together with a great score by Joe Hisaishi who also did the soundtrack of the Ghibli movies. But with such a long playtime I haven’t managed to finish it. As the release of the sequel will take quite a while, it might be the perfect time to revisit that game.

What the first trailer reveals hasn’t really captured my imagination though. Looking more like a typical anime with so-so English voice acting and way too much pathos, it looks and sounds a bit too generic. But then again the original Ni No Kuni: Wrath of the White Witch wasn’t the most original RPG story, either. Maybe that was the reason why I didn’t continue playing it. It might also have to do with the fighting or or quest system which didn’t deviate from the standard JRPG fare. However, the movies also suffer the same problems at times with characters who look so similar and storylines which might not be the most innovative ones. It’s simply how the audience is drawn into them, and if one gets past the emotional outbursts, there’s the same attention to detail when it comes to the wonderful world I’m very excited to explore, full of Japanese folklore, but also with a European, modern touch of architecture. Fingers crossed the option to listen to the Japanese track with English subtitles will be included as well.

The game will be exclusive to the PS4 (as Ni No Kuni: Wrath of the White Witch was to the PS3) without a release date yet. Expect more news coming in 2016.

Being an avid gamer, cinemaniac, and bookworm in addition to other things the internet and new media present, I'm also very much into DIY music, rock and pop in particular. Writing short or longer pieces about anything that interests me has always made me happy. As both an editor for German website "Adventure-Treff" and UK website "Future Sack", I like to write reviews and news about recent developments in the movies, games and book industry.
View all posts by nufafitc →
This entry was posted in Game trailers, Gaming and tagged animated movie, anime, epic trailer, European, fanboy, Final Fantasy, game trailer, Japanese, Joe Hisaishi, JRPG, Level-5, Namco Bandai, Namco Bandai Entertainment, Ni No Kuni, Ni No Kuni II, Ni No Kuni II: Revenant Kingdom, Ni no Kuni: Wrath of the White Witch, PS3, PS4, Revenant Kingdom, roleplaying game, RPG, Sony, Studio Ghibli, The Witcher, The Witcher 3: Wild Hunt, The Witcher 3: Wild Hunt epic trailer, Wrath of the White Witch. Bookmark the permalink.