For smartphone users, this might already be old news, as the game was released in July this year. But PC gamers will get their own digital version of Bloodirony Games‘ arcade shoot-’em-up Shooting Stars.

Never has there been a game as straightforward with its title than this one, as the goal is really to shoot all sorts of celebrity stars, ranging from Justin Belieber, Starlette Brohansson, Gabe Oldwell to Lady Gogo, Robert Downer Sr. and even Nuck Chorris. You see where this is going… Without getting into legal problems, the names are pretty original, and the concept of evil aliens disguising as these stars is also genius (even if it was already hinted at in the first Men in Black). 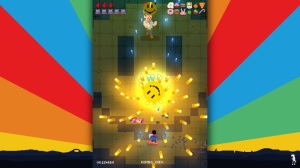 Gameplay-wise, it’s a rogue-like, so dying might be the end of the level and game. Weapon power-ups are also standard fare, but what isn’t standard is that hipster Tscherno uses his cat for attacks, in addition to a hoverboard to move around. So how retro and cool is that? The trailer might look and sound like any pixel-art arcade indie game released, but the humor certainly makes for an interesting gameplay experience, especially with the cat. It’s all without much violence, though, so don’t expect the carnage seen in Hotline Miami.

The game will be released by Daedalic Entertainment on January 4th, 2016 for PC (great to see how they try out other genres than just adventure games or RPGs!). On which digital marketplace isn’t known yet, but Steam is highly likely, while GOG might not, considering that Fire wasn’t released DRM-free, either. It also remains to be seen in how far the game differs from its smartphone version and for what price it sells, considering that the competition of shmups is pretty big.