Bringing a trilogy to a conclusion isn’t an easy feat, but Episode VI – Return of the Jedi is satisfyingly entertaining and a fitting end to the classic Star Wars saga.

Luke Skywalker has to rescue Han Solo from the clutches of criminal underground boss Jabba the Hutt, while Darth Vader and the Emperor supervise the construction of a second Death Star near the planet Endor.

There seems to be a lot of condescension and even hate for this final installment. It might have to do with fans being disappointed with Episode I-III or Kevin Smith’s character Randal in Clerks II saying that the movie was horrible with just a bunch of Muppets in it. But if one disregards these comments and feelings, one will get a very entertaining and enjoyable sci-fi experience.

Granted, the idea of having a second Death Star built is a cheap way of having a reason for the Empire and Rebellion to face each other in battle. But the final space fight is just as great if not better than in the original. There is also more variety in scenery with Jabba the Hutt’s palace, the wood planet Endor, and the Death Star, while there are memorable fight sequences like the fast speeder bike chase or a fight against the giant Rancor beast. 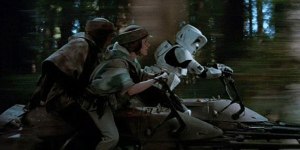 Despite many people not liking the furry Ewok warriors, these fit into the universe quite well. They might be cute and serve as comic relief, but together with the entertaining if somewhat trash-y spin-off movies, they’re the most memorable creatures in the series. The Emperor is also a great character who might not have been very prominent in the former movies, but is shown here as an evil force to be reckoned with. Darth Vader’s and Luke Skywalker’s relationship is handled quite well, even if the rest of the characters are left behind somewhat despite more surprising turns of events.

Something that hasn’t been mentioned before but that is just as great or even perfect is John William’s memorable score driving the excellent space or saber sword fight scenes as well as some sad ones. Personally, this remains one of my favorite entries in the saga. It might not be as original as A New Hope or coherent as The Empire Strikes Back, but it remains a thrilling and fun ride with a great ending.