Colonel Christopher ‘Maverick’ Blair is recalled to active military service by Admiral Tolwyn after having retired, as a conflict between the Confederation and the Union of Borderlands who don’t agree with their politics is on the verge of escalating into war due to a medical Confederate transport being destroyed by unknown and supposedly Borderlands fighters with a devastating anti-ship weapon.

This war of ours
For a long-running series relying so much on the animosity between the good Terrans and the bad Kilrathi, it’s quite a brave departure to focus on humans fighting humans. While this had already been touched on in the add-on Special Operations 2 of Wing Commander II to some degree, the connection to the cat race was always part of the individual storylines. While some may mourn the lack of epic but also campy storytelling (although there are brief scenes with the Muppets-like Kilrathi who look even more ridiculous than before), others will welcome this new direction, as it makes for a much more involving story depicting a time when enemy lines aren’t clearly drawn anymore with orders being questioned and political corruption found in higher military ranks.

The story is full of surprises and is complemented by better special effects and real sets instead of computer generated backgrounds. The acting of all involved is also much more convincing with Mark Hamill playing an embittered but later also more human leader figure, Malcolm McDowell an even more intimidating Colonel, and Jason Bernard as a Captain who seems to have lost touch with the current politics of the Confederation. While there is still the odd one-liner or two, even Tom Wilson as Maniac delivers a surprisingly adult performance of a wingman who for once stops bragging about his flying skills and ponders about the implications a war can have on the individual. The rest of the crew members also find themselves in moral dilemmas and live out their own human dramas, something even a thrill seeking pilot like Troy ‘Catscratch’ Carter played by martial artist Mark Dacascos has to realize.

Tough decisions
While one could skip certain conversations in Wing Commander III and go from one mission to the next without any punishing consequences, one is often forced to make decisions which can change certain missions and dialogues dramatically, making for a much more involving experience with multiple story paths to follow. Early on in the game Colonel Blair has to choose if he should defect or stay with the Confederation. This already shows that the decisions to be made are more difficult and have a stronger emotional effect on the player than most of the morale influencing ones in the former game.

At times the game almost feels like an FMV adventure game with crew members constantly asking for Blair’s advice or awaiting his commands. Whereas Wing Commander III relied more on exploring the TCS Victory and finding out about various characters’ backstories which didn’t necessarily have a big impact on the story or mission branches, the interaction with NPCs is much more organic this time, often with cutscenes playing after completing a mission which immediately require choosing a specific dialogue option. While there are still optional conversations, even these are more rewarding in the long run, as the morale of wingmen isn’t the only thing that is affected, because completely new missions and story paths open up as well.

Familiar but also refined gameplay
Choosing one or more wingmen for missions is again an integral part of the gameplay as well as selecting ships and missiles. However, it works quite differently from past games, as one can see additional information about individual attributes like offensive and defensive flying patterns as well as the likelihood of following orders, being a hero or getting out of trouble as quickly as possible and leaving the player alone in the space battle field. While this is quite an interesting approach to combat strategies, it’s too bad that so many wingmen aren’t featured in the story which makes it rather pointless if they die or not during missions, as one doesn’t feel emotionally attached to them anyway.

Fortunately the mission design is much improved. While it still boils down to destroying specific targets, protecting ships during escorts or docking operations, the way these objectives are part of the ongoing story is much more engaging than in previous installments of the series. Even if going from one NAV point to the next is familiar space combat territory, there are enough missions in which sudden surprises break the routine of shooting everything. The final missions are a perfect showcase of how live-action video sequences transition into playable space fights and even result in a strategic battle of wits in dialogue scenes, creating an unparalleled immersive cinematic feeling.

Looking similar but so much better
Technically, the game hasn’t changed much from the third game, which is certainly no bad thing, as explosions and detailed ships look great. Only the ground-based missions disappoint with their low textures. However, a big improvement are the DVD-quality cutscenes which are far superior to the pixelated mess of the predeceding title, but only if one chooses to play the DVD version (i.e. the one GOG offers). The soundtrack is even better this time around with more variety which makes the dogfights and flying around impressive-looking ships more captivating than ever. 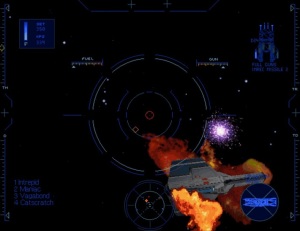 The perfect FMV game
Wing Commander IV: The Price of Freedom is a perfect example that FMV games don’t necessarily mean bad acting and limited gameplay. On the contrary, it’s a showcase of how the player is put into the spotlight of a suspenseful but also thought-provoking sci-fi story that is much more engaging with its realistic portrayal of warmongering than the often problematic militaristic propaganda of past games while offering still impressive CGI cutscenes and top-notch acting performances at times. While the space combat part hasn’t changed much and the replaceable wingmen mechanic is questionable, the sheer amount of dialogue options in addition to the branching story paths and alternative missions makes this the strongest entry in the saga yet that hasn’t been bettered in any other game of the genre since.

Buy the digital version for PC on
GOG