Full motion video games don’t have the best reputation when it comes to acting and gameplay, but what happens if something with C movie quality and lots of humor like Access Software’s Under a Killing Moon comes along and shakes things up a bit?

Private detective and also dance instructor Tex Murphy is hired by Countess Renier to retrieve a stolen statuette and suddenly gets involved in a doomsday plot of a secret society that wants to rid the world of mutants who are a product of radiation after World War III.

Comedy thriller or sci-fi parody?
As in every good detective novel or film noir movie, the story starts out to be rather simple with a robbery in the neighborhood Tex lives in and then gets more complicated with new leads to follow and characters who are not what they seem to be. With a post-World War III setting, futuristic Blade Runner-like vehicles are as prominent as that of racism against mutant citizens. Granted, these are usually depicted as freaks of nature in their appearance, but they’re very human in their way of living, although with an oddball sense of humor, e.g. with diner owner Louie LaMintz who is a bit slow in speaking and thinking but has a heart of gold and serves hot brains, or Clint the Bum who lives in a dumpster and is addicted to chocolate. Tex Murphy (played by designer Chris Jones) is simply an iconic character and easy to like with his fedora hat, clown-like grimaces and sarcastic remarks, so it’s a joy to listen to him commenting on even the most mundane objects with his down-on-luck-but-never-giving-up attitude.

The bad acting of everyone involved should usually break the illusion of being in a movie, but in this case, the exaggerated delivery of lines, over-the-top facial expressions and grotesque make-up work for the trash-y feeling of the game. Watching all those actors and actresses (some of former Hollywood glory like Margot Superman Kidder, but most unknown and rather untalented) talk into the camera as if they’re trying to outdo themselves in melodrama or clown comedy adds to the weirdness. With so many funny scenes and one-liners which range from mildly amusing to genuinely great (e.g. with a children TV show about Inspector Burns who teaches about the dangers of fire while looking like a very bad example of avoiding it himself), it’s difficult to take some parts of the story seriously, as is the case with the supposedly dangerous shape-shifting man Chameleon or the cult against mutants.

While the humor in dialogue and slapstick scenes feels too forced at times, reading newspaper articles shows that the writing can be quite witty, as these make fun of sports and politics which parody contemporary society (never mind that the game is from the 90ies). This attention to detail can also be found in the Old San Francisco Tex moves around in. It might just be one street, but with a pawn shop, a pizza joint, a diner, a hotel, a warehouse, an old joke accessory shop, every building has its own story, and one gets so accustomed to its occupants or learns about the former owners that it feels like a breathing, living world. 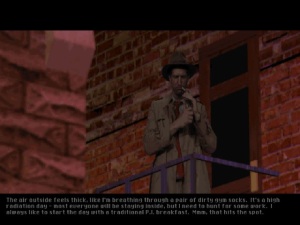 Investigating or puzzling?
Detective games are all about finding clues and interrogating suspects or questioning people about leads, and Under a Killing Moon doesn’t disappoint, although it can become quite overwhelming with so many dialogue topics, which is especially annoying if half of them result in “I don’t know” replies. Conversations can become puzzles as well when a special attitude of talking to a person or a specific order of asking or answering questions are necessary to progress. The chapter-like division into days which already worked to great effect in Gabriel Knight: Sins of the Fathers is motivating (as is the score system which rewards players with a private detective ranking at the end) with its unlocking of more places to visit and new people to question. But it’s often not clear what needs to be done to end a day, as trigger events aren’t always obvious.

There are quite a few inventory-based puzzles to solve, and despite some logic-defying instances, one usually gets one’s head around them. Even if they’re not of the most imaginative kind, they’re varied enough so that the puzzle design doesn’t become stale. The difficulty is mainly due to so many places to visit and objects not necessarily being where they have to be used, which might be the essence of a good adventure game, but remembering all the locations can be tricky. At least the map makes it easier to jump from one to the next. With different leads to follow or obstacles to overcome during the day (or spanning a larger time frame), the gameplay gives the player a certain freedom of puzzle solving even if the story remains linear. If one still gets stuck, a step-by-step hint system that uses the aforementioned score points helps to overcome most problems, although unexpected death scenes leave a bitter aftertaste in an otherwise enjoyable adventure trip. In addition, pixel hunting is a major concern with small items easily being overlooked which is further complicated with the full 3D first-person movement. 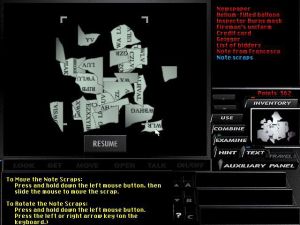 Controlling or losing control?
Controls need a lot of getting used to, as they’re terribly sensitive with moving the mouse up and down to walk forwards or backwards, while switching to the investigation screen with the space bar where one can interact with the environment is even more cumbersome. In some cases one has to lower or raise the camera with additional keys in order to look into drawers or under desks, for example. In theory, this sounds like a great use of the 3D environments, but it’s simply tiresome to inspect rooms and use the inventory in this way. There is also one location where one has to evade a sentinel robot and at the same time look for items and solve puzzles, making this movement problem that much more aggravating.

State of the art or aged technology?
Graphically, the game hasn’t aged well, with ugly textures and low-res pixelated videos which don’t run very smoothly either, although the locations themselves are full of little details and the way how real-life actors are put into CGI backgrounds works for the most part. Fortunately the soundtrack makes up for the technical deficiencies, with variety found in both melancholic, suspenseful or silly tunes. The Jazz influence is present throughout, and while the MIDI audio quality isn’t the best, the score never gets old, as each new environment or character has their own theme.

A classic piece of FMV history
Under a Killing Moon is a perfect example of why FMV games are so special and niche in a good and in a bad way. Interacting with real people who wear bad make-up mutant masks and show even worse acting skills has a certain trash quality, and it’s a good thing that Access Software was aware that it’s more a comedy than a serious sci-fi thriller. The story is complex and touches serious topics, but it gets quite silly and convoluted at the end, making it more pulp fiction than serious sci-fi or detective story material.

Gameplay-wise, the puzzles aren’t as much fun as the investigation parts, while the controls are fiddly and the graphical presentation isn’t great either. So if one expects the mindblowing interactive movie experience as it was promoted back in the days, one should prepare to watch a silly comedy crime sci-fi mix with low production values but high entertainment value, which is in no small part due to its memorable main character and the strange but believable world he lives in.