The serial killer with supernatural elements theme isn’t only part of adventure games like Post Mortem or Still Life, but it can also be found in Acclaim Studios Teesside’s atmospheric horror action-adventure Shadow Man, based on Valiant Comics’ series. 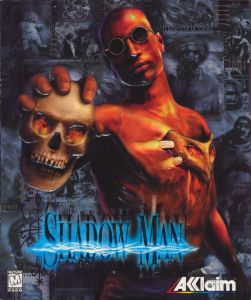 Michael LeRoi as the Shadow Man has to prevent the Five, a group of psychopathic serial killers, to bring Armageddon with the help of a mysterious man calling himself Legion who unites them under the slogan “For we are many”.

Comic book-like characters and storytelling
One doesn’t have to read the original comic books in order to get a good idea of what Shadow Man is all about in terms of plot, character development and world building. While the dialogue is full of hammy writing and the plot doesn’t move at a very engaging pace due to the non-linear gameplay, one still feels for Michael LeRoi’s personal attachment to both the world of the living (Liveside) and the dead (Deadside) as well as his emotional connection to Mama Nettie, the priestess who gave him the power to travel between the worlds. His little brother Luke whose teddy bear is essential for going back and forth between the worlds might not be the most subtle narrative device, but it’s enough to give the player some kind of direction. There’s also Jaunty, a top hat wearing snake with a skull for a head who serves both as a wisecracking and advice-giving friend of Mike, serving as a comical sidekick one can return to and receive often amusing comments and sometimes even hints. 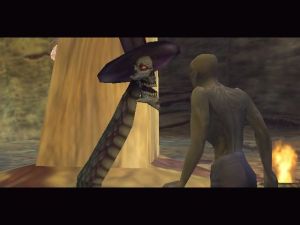 The antagonists are also quite imaginative, as they have their own little, twisted background stories that can be read about in investigation files Thomas Deacon, a detective who communicates with Nettie in the background, provides. Without going too much into detail, suffice it to say that their names alone, e.g. Video Nasty Killer or Home Improvement Killer, are unsettling enough, their diary-like descriptions of their role to play disturbingly poetic, and that the real life worlds they can be found in are creepy, especially in the case of the latter whose domain is full of sick pictures on walls and flies buzzing around what appear to be leftovers from his victims. Despite being quite original compared to other serial killers, as can be seen in Still Life 2 or even Heavy Rain, their screen time and interaction with the Shadow Man are too short to leave a lasting impression. The religiously-inspired plot also lacks a bit of suspense, with only a few cutscenes progressing a story that was promised to be epic but is overshadowed by the action and adventure elements. 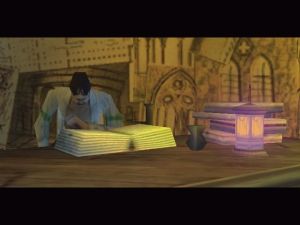 It’s a big, big, dark and ugly world
What leaves an impression though is how the worlds Mike visits to are constructed and also how each new location is introduced with poetic, vivid descriptions, which might stand in stark contrast to the rest of the writing, but give each their own dark theme. While there are certainly similarities in Deadside between rivers of blood and endless corridors in Liveside buildings which outstay their welcome as well as a rather small selection of enemies, the player is soon lost in both worlds, feeling wonder and horror at the same time. The levels are massive and take a lot of time to pass through which is mainly due to the fact that many paths are closed until one can open their Shadow Gates. This can only be done by shooting Govis, containers which hide Dark Souls, with the Shadow Gun and therefore leveling up one’s Dark Souls power. Collecting these is no easy task, as one has to make oneself familiar with the big world and remember all the places one couldn’t reach before without unique abilities. 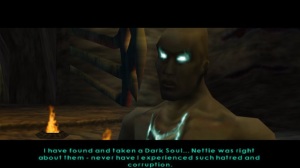 An on-screen map or an indication where souls or even Shadow Gates can be found is sadly absent, although one can check how many Dark Souls have been collected in these areas. Only a visualization of Deadside in a printed poster form and the level-select screen with Luke’s teddy bear hint at the vast world where it’s easy to get lost among the interconnected passageways, bridges and ultimately locked and unlocked Shadow gates. The Temple of Life, Fire, Blood and Prophecy doesn’t only are puzzles in and of themselves with variations in their design, i.e. platforming, lever and button pushing or fighting are the order of the day. After completing these trials, Mike receives special powers, e.g. walking through lava, swimming through acid rivers or climbing water(blood)falls among others. Not every ability is necessary to complete the game, some additional weapons (like a machine gun or shotgun) and accessories (like a shield) are optional, but it really helps to find them all before going into the final tough boss battle. 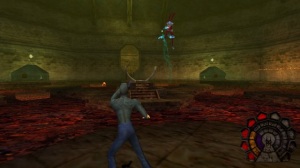 Freedom of choice and pain to inflict or receive
It’s completely up to the player where to go and which souls to find. The same holds true for Cadeaux, small ceremonial pots in the form of masks, that give Mike a boost in health every time he offers 100 at altars in the Temple of Life. While it’s possible to confront some of the Five early on in the game, one won’t defeat them, as Mike can’t use his Shadow Gun in Liveside, a requirement to free them from their earthly bounds and their Dark Souls. Only much later after being in possession of specific objects that can again only be found behind more powerful Shadow Gates is it possible to walk through Liveside as well to acquire souls that were immune against the normal hand gun before. 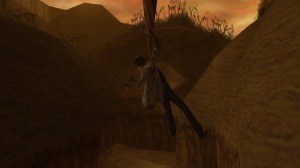 If going through the same locations again and again without sufficient hints or a map wasn’t difficult enough, then all this is made even more difficult by re-spawning enemies. While these leave orbs to regain health after being defeated with the Shadow Gun, they make level progression more tedious than necessary. Add some very awkward jump, climb and swim controls with the typical camera control issues and you end up with frustrating deaths, as pixel perfect climbing and jump acrobatics are on par in difficulty with an often overwhelming number of enemies shooting or cutting from all sides. The combat system can be customized with attributing two weapons to the left and right hand, but switching between these and keys to open doors or other special objects with a very counter-intuitive inventory system as well as holstering everything in order to climb makes it less fluid. 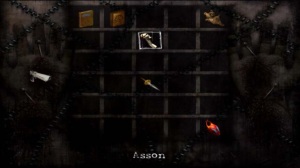 Despite puzzles being a welcome change of pace, they usually don’t get any more varied than pushing a button here and going to an open passage there, which can become quite repetitive in the already rather long 30 hours journey. Boss fights are also disappointing, even if they have a unique environmental theme, it eventually all comes down to shooting, running away and covering again and again. Considering that they’re presented as unique individuals, they could have used more than different weapons. 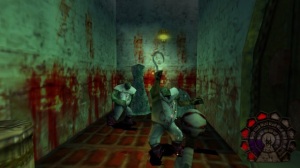 Dated but not outdated visuals, still a masterclass in audio
The game still looks and sounds great even today. While the character models and animations aren’t the best, they still have enough details to give them a colorful comic book look. The locations might have unspectacular wall textures and are often indistinguishable with their room and corridor structure, but they’re still visually nice to look at, especially with water and spooky lighting effects, as can be seen in the Bayou area. Special mention has to go to some wonderfully drawn cards that tell the prophecy the Shadow Man has to fulfill and that are aesthetically more interesting than the cut-scenes. 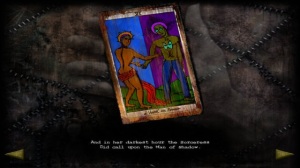 Voice acting is quite good, especially with Jaunty who has a refreshingly unique Irish accent, although Mike’s swearing can become annoying, which is not only the fault of the voice actor being too enthusiastic at times, but also because of the writing, as can also be heard in the case of each individual psycho killer who has a fitting but exaggerated tone of voice. However, the biggest draw to the worlds of Deadside and Liveside is the sound design. Disturbing screams of pain in the distance, wailing children, sounds coming from a music play box, the whirring of chainsaw blades are only a few of the sounds that can be quite oppressive. Music is also appropriately atmospheric and scary, with all sorts of echoing instruments, distorted chorus samples, drum and bass parts among others. 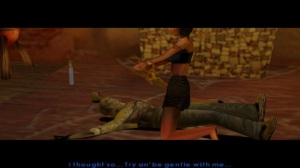 A classic action-adventure with all its highs and lows
Shadow Man is a fantastic game when it comes to the excellent music and sound effects as well as building an unbelievably expansive world with all sorts of memorable characters, antagonists and enemies. The non-linear gameplay is impressive as well. Unfortunately it’s here where the storytelling is left behind in its many narrative possibilities, as there’s simply not enough interaction between them all, i.e. dialogues could have been better written and more rewarding cutscenes added. Controls could also be more accurate, while the levels and boss fights can drag on quite a bit. It’s a very difficult game and shouldn’t be tackled if one is used to less than 10 hours adventures or doesn’t like cumbersome combat and platform elements. If one can live with these compromises and doesn’t mind lots of backtracking, one will find an unforgettably atmospheric action-adventure.