I already discussed the original and revamped version of Shadow Warrior Classic Redux when it was made available for free, but I didn’t mention that there was also a remake and even a sequel in the works. The latter is finally here, and it looks gorgeous and like a lot of gory, bad-ass fun. 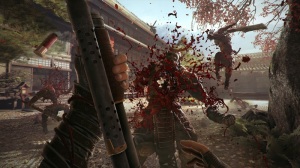 Taking on the role of warrior Lo Wang whose battle against his old master didn’t bring peace but monsters to the world, the player has to fight again in a conflict between a scientist, his nemesis, and the demonic forces. What this means is simply an excuse for much bloodshed with an amazing array of 70 blades and firearms which help to literally shoot or cut enemies into pieces. With wisecracking, over-the-top silly cutscenes and so much red goo on display, it can never be taken seriously, as the 80s-music driven intro and release trailer show. 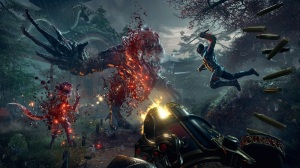 The game is now out for PC with console versions following in 2017. One can choose between the standard or Deluxe Edition that comes with the soundtrack, artbook, and Solid Gold Pack that includes the exclusive gold co-op ninja skin, gold katana, and gold MP7. It’s also worth mentioning that one can play on both Steam and GOG platforms, as the game supports cross-play with each purchase.

Buy the standard game for PC on
GOG
Steam

Buy the Deluxe Edition for PC on
GOG
Steam