A simple premise, a haunting score, and some good scare jumps can make all the difference in David Robert Mitchell’s indie horror movie It Follows, showcasing another rough modern diamond for a Halloween fright fest.

After a brief sexual encounter and an innocent date, a young girl is soon chased by a supernatural force that takes many human forms, and it’s up to her group of friends to help her out.

It’s difficult to be innovative in the horror genre, as it usually boils down to frighten the audience with jumpscares or unsettling fear of the unknown. Even if It Follows relies heavily on 80s slasher movies with its wide and long camera shots and sudden appearances of people who want to grab the heroine, it still feels more original than the psycho drama approach of The Babadook. It might be unfair to compare these two at first, but looking closer one finds some similarities.

The movie is slow-paced and focuses on an entity that could appear out of nowhere as different people. So almost anyone walking towards the protagonists can be a threat. The camera is unpredictable, as it often follows them without showing what’s behind them. In other instances it does, with the heroine unaware that a person moves closer. And then there are those few instances when someone appears right from behind the other characters, as the idea of them not seeing it is another creepy touch. As suspenseful and frightening as it sounds, boredom sadly sets in too often. 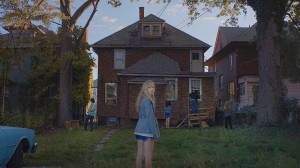 The reason for this isn’t simply that there are too many scenes with people sitting, walking or driving around, but it’s found in the dialogues and characterizations. Trying hard to make their teenage lives interesting and their language realistic, the director/writer ends up with just a lot of small talk with only a few glimpses of interesting anecdotes or memories, so it’s difficult to relate to these people. It doesn’t help that the soundtrack is mesmerizing in a lullaby way. However, when the chasing sequences reach the confrontation stage, the score suddenly becomes very disturbing with louder noises and thumping bass segments, and it’s here where the film succeeds in creating both tension and terror. It might not be the most original or frightening movie ever made, nor is it a good teenage drama, but at least it does a pretty good job of recreating the feeling of being followed and terrified without the use of too many special effects.

If you liked reading this article, make sure you pay a visit to Future Sack which kindly features it as well, and every LIKE or comment is appreciated on EMR’s Facebook page or FS’s Facebook page :). Or FOLLOW the blog on EMR’s Twitter page. Using one of the Amazon links and buying the product also helps ;).

Being an avid gamer, cinemaniac, and bookworm in addition to other things the internet and new media present, I'm also very much into DIY music, rock and pop in particular. Writing short or longer pieces about anything that interests me has always made me happy. As both an editor for German website "Adventure-Treff" and UK website "Future Sack", I like to write reviews and news about recent developments in the movies, games and book industry.
View all posts by nufafitc →
This entry was posted in Movie reviews, Movies. Bookmark the permalink.