Last year we had a Gabriel Knight special featured in the weekly Halloween gaming week, and while the original is a relic of the 90s, its storytelling is still influential, as can be seen in indie point-and-clicker Kathy Rain.

Journalist student Kathy Rain visits her hometown after having heard about the death of her grandfather and soon finds out that there’s something very eerie going on with the inhabitants.

A small town community with secrets
References to David Lynch’s mystery TV-series Twin Peaks can’t be overlooked, but unlike a game like Deadly Premonition, they’re not intrusive. The reason for this is that the female lead isn’t the typical private investigator, and even if it takes some time to find sympathy for her cynic attitude, she soon becomes an interesting alternative to the standard adventure game heroes. Her sidekick Eileen, a Christian positive-thinking roommate, is another example of the witty writing. While the rest of the cast isn’t always fully fleshed out, the people Kathy meets are still memorable enough. 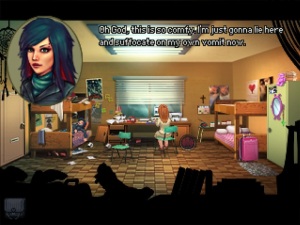 Just as in Gabriel Knight, each day brings new plot developments and leads to follow, making the game a suspenseful crime as well as drama story with supernatural elements. The latter aren’t as obvious, because psychological horror and real-life events become entangled, especially with Kathy’s past that is slowly unraveled. It loses a bit of focus at times, but with all kinds of people to interrogate, mysterious and sometimes shocking events to experience, there’s always something to do.

Old-school puzzling
Puzzles are usually well integrated to forward the story, but they’re quite repetitive and uninspired. There are way too many codes to find out and some of the inventory-based or environmental puzzles are a bit too obscure. Solutions aren’t always clear, because hints are sparse and some conundrums, e.g. tricking a computer help desk person into believing the PC is broken, are unnecessarily complicated and superfluous. Fortunately, there are instances when the game almost reaches the high quality level of Gabriel Knight, i.e. when one has to decipher codes and hidden messages in a biblical text. It also gets rather creative in the more surreal parts of the game.

Old-school looks and new sounds
The game uses a pixel art presentation that is very similar to classic Sierra adventures, which means that the backgrounds and character portraits are detailed, but due to a low resolution, one has to make compromises. The same holds true for the few character animations that become repetitive. Weather effects like rain or leaves that are blown around by the wind still add to the atmosphere. For an independent production, the voice acting is great despite not having well-known actors or actresses in the cast. Music is also quite good with a nice arrangement of guitar parts, making it different from the typical indie synth music, although one shouldn’t expect a Robert Holmes score. 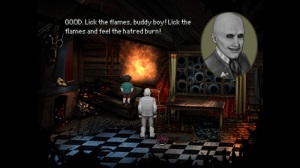 Classic telling of a new story
Kathy Rain doesn’t reinvent the genre and is simply a continuation of the legacy the Gabriel Knight series left behind. It has a strong main character and an interesting sidekick doing a suspenseful investigation full of surprising twists and creepy sequences. While puzzles aren’t perfect and the characters aren’t as memorable as in Sierra’s games, the title still stands on its own and should definitely receive a sequel.