Usually, the more a survival horror game series becomes mainstream, the less frightening and more action-focused it gets. Darkworks’ Alone in the Dark: The New Nightmare proves that it’s still possible to scare people with a modern look.

Supernatural detective Edward Carnby, together with anthropologist professor Aline Cedrac, investigates the murder of his friend Charles Fiske who discovered a dark secret on Shadow Island about old stone tablets bringing the end of the world with nightmarish creatures roaming the earth.

B-movie madness and silliness
The Alone in the Dark series has always been good at making the player plunge deeper and deeper into a story of H.P Lovecraftian madness, and the newest entry is no different. While the mad scientist approach of experimenting on people and creating abominations isn’t particularly new and the connection to a shaman and rituals becomes even more nonsensical by the minute, the plot is still entertaining enough on a B-movie kind of level, with more and more dark secrets about the family living on Shadow Island discovered.

The diary entries and research as well as newspaper articles Carnby and Cedrac find are well-written, which unfortunately can’t be said about the dialogues. Sure, they’re just as campy as Capcom’s first Resident Evil, but it would have been nice to identify more with the main characters. Despite Aline trying to discover something about her unknown father’s identity, she remains just as faceless as Carnby, with only a few mildly amusing lines exchanged between them making their interaction enjoyable. The main antagonist, the whole spiritual connection to dark rituals add to a rather muddled mess of a story that is only a narrative excuse for investigating scary places. 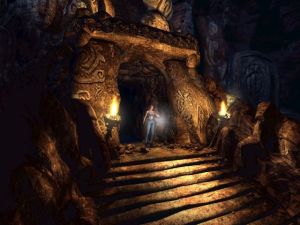 Tricky navigation, puzzling, and saving
The haunted mansion theme with lots of zombies and other creepy crawlies has been done to death, but the setting is still immersive enough to evoke fear and terror in the player, with more and more locations outside and inside unlocked the further one progresses. Despite some orientation problems and a map that isn’t easy to read with many doors and keys to keep track of, the puzzles are mostly logical and move the plot forward at a steady pace. While they usually rely on finding number or letter combinations, there are some more imaginative inventory combinations that can be quite tricky, as one has to split certain items to create new ones. It’s only very frustrating that it’s easy to overlook important items in the detailed environments. While most are highlighted by linking lights, even positioning the character in front of them to pick them up can become an annoying exercise in endurance.

Another problem is the implementation of savegames. Instead of using a limited number of typewriter ribbons as in Resident Evil, one uses charms that are plentiful to find lying around. It’s just too bad that each time one saves, the player’s progress in a room isn’t saved, so for more complicated puzzles, one has to do them again in order to proceed, which becomes especially confusing, as there are only 5 saving slots with no indication of when these were created.

A scare party of two
As in Resident Evil 2, playing the game a second time with another character doesn’t simply result in the same story or gameplay experience. Sure, the overall plot and ending doesn’t change, but the way how the game offers two perspectives is ingenious, especially since Carnby and Cedrac often communicate via walkie-talkies, therefore teasing the player about what happened on the other side of the line. In order to understand the full story, one should play through it twice, and it doesn’t get boring in terms of puzzle or shooting mechanics. While the detective’s parts are more about shoot-outs with more ammunition, the anthropologist has more puzzles and less firepower, the latter meaning that it’s quite tough in places with so many enemies. 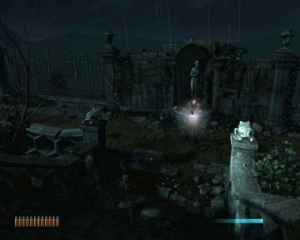 Action in light and darkness
It’s here where the game fails, because as cumbersome as the tank controls with ever changing camera perspectives are, there are way too many enemies re-spawning and attacking out of nowhere that they become more annoying than scary, especially in very small corridors when it isn’t possible to run around them, something the old Resident Evil suffered from, too. Boss battles are extremely difficult as well with problematic aiming and no clues of how to beat them.

Still, the game is quite original in using light and darkness to great effect. The latter makes creatures manifest themselves and attack the player, while the former throws them back or even kills them, which is especially useful for Aline who has to switch on the lights in rooms to have a remote chance of surviving. Pointing the flashlight is also not only a tool to better see in the dark, but it’s part of the fighting mechanics, something that Alan Wake would later make use of as well. In addition, there are some lightguns later in the game that can be reloaded via crystals, which makes the problem of spare ammunition less prominent, even if it means that the game turns more into a shooter than a survival horror game.

Dated looks, but still scary sounds
The comparisons to the original Resident Evil don’t stop with gameplay, as they carry over to the presentation as well. What this means is that the video sequences are well done with some nice action set-pieces, although the reality in game graphics looks different. While the water and lighting effects with dynamic flashlight throwing creepy shadows on the environment are impressive, the various camera perspectives adding to tangible fear, and the backgrounds look detailed despite being washed out due to a low resolution, the character models haven’t aged particularly well. Even more distracting is how the characters’ lips never move during conversations and the faces remain mannequin-like, making the dialogues even less exciting.

The voice acting adds to the unintentionally funny melodramatic scenes, which is mainly due to voice actors delivering their lines without any context, turning the dialogue into disconnected parts with awkward intonation. Fortunately, the sound design is excellent throughout with some very unnerving and disturbing parts that only complement the spine-tingling creature screams and whispering voices in addition to echoing foot and claw steps. Orchestral music additionally helps to enhance the cinematic presentation in the more action-heavy sequences.

Not a classic, but a good reinvention
Alone in the Dark: The New Nightmare is a scary game with its intense, chilly atmosphere, but it’s also flawed due to unfair gun fights, clunky controls, and some obscure puzzles. It has an interesting approach to storytelling by having two very different character sections that complement each other, but its story is somewhat muddled and the main characters aren’t that memorable. However, it’s still a good reinvention of the older titles that weren’t perfect, either, sitting somewhere between the action-heavy, frustrating sequel and the more puzzle-focused third installment without ever reaching the good horror pacing of the original.

6 Responses to Classic horror gaming: “Alone in the Dark: The New Nightmare” (PC)