Mimimi Productions‘ Shadow Tactics: Blades of the Shogun breathes new life into the tactical strategy genre with an Asian touch.

The Commandos series is still one of the most beloved hardcore gaming franchises, despite the third and fourth installment focusing a bit too much on action. It’s not the first time that a German developer tries its hands on the genre in different settings, as it can be seen in Desperados and Robin Hood: The Legend of Sherwood. So it was only a matter of time that feudal Japan was chosen as a battlefield where silent kills and the coordination of five different characters with their own unique skills are essential for success. However, it comes as a surprise that it’s from a developer who’s only done child-friendly games like The Last Tinker so far. The involvement of Daedalic Entertainment isn’t so surprising, though as they’ve already dipped into the strategy genre pool before with the Blackguards titles. 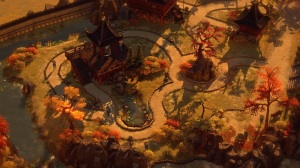 Of course the personalities of the characters in the game reflect their play styles, while their social interactions should offer enough depth which can hopefully be found in the story as well, although if one knows classic samurai movies like Seven Samurai, the plot doesn’t have to be so complicated after all. Having a ninja who uses his sword and shuriken to kill enemies, a samurai who can get rid of multiple targets at the same time, a Geisha who distracts enemies, a street child who lays traps, and a marksman who takes enemies off from afar, sounds like a pretty good combination. Graphically, the game looks fantastic with smooth animations and very colorful backgrounds in addition to varied environments, and with different approaches to finishing missions, there should be enough replay value as well.

The game is now available on PC with a 10% discount that will last until December 12, 4:59 PM UTC. Console versions (PS4 and Xbox One) are announced as well. The pretty cool retail Deluxe Edition should also be mentioned, as one rarely has the chance to get chopsticks and a beautiful hand fan in a game box.

Buy the standard retail version for PC on
Amazon Germany

Buy the Deluxe Edition for PC on
Amazon Germany