Revolution Software is known for telling great stories with memorable characters in classic point-and-click adventure games, but the company also tried their hands on a more action-oriented endeavor called In Cold Blood.

MI6 Secret Service agent John Cord investigates the disappearance of a fellow agent and friend in Volgia, USSR, where he finds out that Dmitri Nagarov, former chief of intelligence and security and now independent premier, plans a sinister plan against the rest of the world with a new super computer.

Realistic spy fiction
Every good over-the-top spy movie has a memorable cast including a super villain, countless henchmen, a charismatic lead, and inventive gadgets, with the plot revolving around the hero saving the day and usually getting the woman at the end. While In Cold Blood doesn’t tick all these feature boxes, it still manages to create a believable world in which future technology doesn’t feel too far removed from reality, as the scenario of a madman trying to start World War III with a nuclear strike isn’t far fetched. It’s not really original, but it works to make the player feel like a super spy.

The plot itself is suspenseful, being full of unexpected twists and turns. This is mainly due to the narrative structure, because the now captive main character retells events leading to his current predicament. The story then continues from there and brings everything to an explosive ending that fits the overall action. It’s just too bad that the characters can’t match the ambitious story that also gets a bit too ridiculous in the end with some unintentionally funny moments. 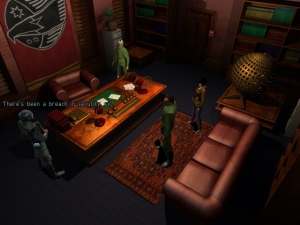 Characters to remember or forget
Compared to Charles Cecil’s previous Broken Sword games (see especially the respective reviews for the first, the second, and the third installment), most characters are instantly forgettable. It’s not because the dialogues don’t feature any witty banter between Cord and later his sidekick Chi-Ling Cheung, a secret agent of China, or between henchmen who talk about their tiring line of work. It’s simply that one doesn’t really care about them, as their backgrounds aren’t that interesting and their motivations not engaging enough. The dialogues usually focus on moving the plot forward but rarely give more insight into the character’s psyches, making them feel less like unique identities and more like replaceable heroes and villains.

A little bit of action, stealth, and much adventuring
The game tries to mix adventure and shooting elements, but the end result is riddled with problems. Most of the puzzles are logical and varied, often requiring a special portable computer system that is used as a tool for hacking into doors or data systems, operating machines, and sometimes contacting people for hints or even diversions. However, going through each item in the inventory via cursor or gamepad keys makes all puzzles unnecessarily difficult in many time-critical situations. Combinations aren’t possible, so objects can only be used on the environment or the main character. Except for too many instances when one has to disable robots with an electronic device, the gameplay offers enough head-scratching puzzles for adventure fans. The idea to intimidate people at point blank of a gun to make them answer certain questions or perform actions is also well implemented and adds to the spy atmosphere.

However, the biggest problem is pixel hunting in identically-looking corridors in addition to very clunky character controls. Even if suspense is created by giving the player a countdown in certain chapters, frustration soon sets in because of the labyrinthine level design, making it difficult to know what has to be done in which order. Getting the character stuck in door entrances, on furniture or stairs in addition to positioning him in front of consoles or objects to pick up while under pressure doesn’t help much either.

Fighting isn’t much better, either, with some unfair situations when the character enters a room and can’t react fast enough to shoot enemies due to problematic movement controls and even worse aiming. Collecting health packs and ammunition from dead bodies is an obvious nod to the action genre, but if it’s usually the game’s fault that one can’t hit enemies or get cornered because of bad controls, then there’s definitely something wrong with the combat system. It’s possible to use stealth and knock down enemies from behind, but these situations usually don’t require the same observation skills or strategic thinking of games like Metal Gear Solid or Splinter Cell, as running behind human targets doesn’t create any noise and there’s always enough time to finish them off.

Outdated 3D visuals with nice audio design
Graphics are something of a mixed bag, as character models look quite ugly and their animations are either non-existent in conversations or puppet-like in motion. Backgrounds have a certain comic look to them, although they’re nowhere near as detailed as in the Broken Sword games, while cutscenes aren’t anything to write home about, either. However, the music is pretty great with a nice variation of moody music pieces and orchestral ones in action scenes. Voice acting is quite good as well, although at times characters speak out of context with an audio quality that doesn’t often fit the environment.

A good story with problematic gameplay
Revolution Software’s In Cold Blood again proves that the company wants to do things differently with a mix of genres that usually don’t work so well together, while telling a serious spy story. Unfortunately only the latter works for the most part if one doesn’t expect memorable characters. The former mainly suffers from bad controls that make fighting, puzzle, and stealth segments unnecessarily difficult. The 3D environments are also too complicated to navigate at times, being made even more frustrating with timed sequences, which always raises the question if the classic 2D point-and-clicker mouse-control approach wouldn’t have been a better choice.

Buy the digital version for PC on
GOG