It doesn’t happen very often that one remembers all kinds of game aesthetics of the past that work together, but this title looks like a hybrid between Mechwarrior and Syndicate with a thumping synth soundtrack that is reminiscent of movies like Terminator or Drive and games like Hotline Miami. Taking into account that the story revolves around mercenaries trying to escape a violence-infested planet with the only means to accept contracts from mega-corporations, it all makes wonderful Dystopian sense.

The roguelite gameplay might not be to everyone’s tastes, as one can’t save the game, restart or gain experience, forcing the player to complete it in one sitting. If one can live with that compromise, then one is in for an explosive treat: destroying enemies and installations in various districts with 40 kinds of weapons. Fully destructible environments, plenty of mechs, tanks, hovercrafts (56 one can actually unlock) to blast earn the mercenary the money he needs to progress in a 37 mission campaign mode. There’s also a 20+ map freelance mode to try out. 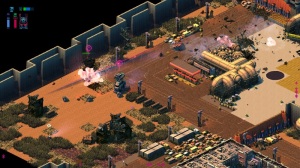 The game is now out on PC with a a 30% launch discount that will expire on June 20, 1PM UTC (at least on GOG, as the Steam version offer only lasts less than two days). One can also get the deluxe edition with the awesome soundtrack and artbook with 40% and 50% discounts that will end at the same time.

Buy the standard edition for PC on
GOG
Steam