For most people boss fights in action games or any other genre are memorable set-pieces, and The Game Bakers‘ Furi takes this premise and runs wild with it in a boss-only brawler.

It’s been a long time since I reviewed Combo Crew, a mobile fighting game that was colorful and difficult at the same time. Then the company made SQUIDS Odyssey which was a completely different story with a turn-based strategy touch. When I spoke with the developers at Gamescom a few years back, they told me about a project that involved only boss fights, but they couldn’t say more about it. So I’m very happy that it finally materialized. 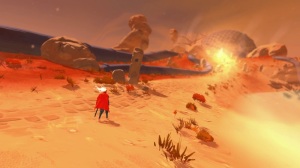 The story is rather simple with the main protagonist being captured and trying to escape a prison. In order to do that, he has to kill all sorts of opponents and finally the jailer in one-on-one battles, using both swords and guns. So far so Devil May Cry or (better) No More Heroes. The art style is Japanese because of the involvement of Takashi Okazaki (known for his work on the anime Afro Samurai) who designed the bosses. Being a sword fighting and dual-stick shooting game, the action is fast and furious, and knowing The Game Bakers, it’s certainly not for beginners. With two difficulty modes starting with Furi, moving to Furier and then finally unlocking a speedrun mode, this is for those honing their skills to perfection. The game looks absolutely lovely with a great cel-shaded art style, while the techno/synth wave soundtrack is also pretty amazing, so this could be the company’s finest hour.

The game is now available on PC, PS4, and Xbox One with a 50% discount that will last until July 11, 1 PM UTC. There’s also a lot of merchandise like double vinyl, digital soundtracks, tee-shirts or posters to buy on the Furi store if you want to support The Game Bakers even more.