Our Halloween gaming special goes into a much darker horror scenario with The Game Kitchen‘s episodic point-and-clicker The Last Door: Season 1.

In Victorian England, university teacher Jeremiah Devitt receives a mysterious letter from his friend Anthony Beechworth who committed suicide, warning him of an entity that wants to destroy him and his former boarding school friends.

Episodic old-school frights
Episodic games work best if they adhere to the TV show template of providing an engaging plot that introduces many mysteries that slowly unravel in the course of the season. The Last Door does exactly that by having dramatic openings and endings in addition to flashbacks, keeping the player guessing what happened before and what happens next. With many plot-lines as well as characters left open to interpretation due to vagueness, one constantly tries to piece together everything and is soon hooked. As Devitt reads all kinds of letters and explores the mansion where his friend died, one is sucked into a suspenseful investigation that is refreshingly different from most point-and-clickers that offer most exposition in dialogues with other NPCs. At least this is true for the first episode The Letter. 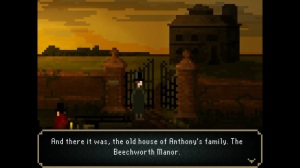 The second chapter, Memories, is a much more dialogue-heavy affair, but returning to his old boarding school that has been transformed into a hospital where patients die under mysterious circumstances helps to keep suspense at a high level. Constant flashbacks reveal more about Devitt’s past and dialogues serve to both tell an interesting mini-story and add to the encompassing story arc. The final two episodes, The Four Witnesses and Ancient Shadows, are much more surreal, full of weird characters and occurrences, and without spoiling too much, suffice it to say that they’re almost David Lynch-like in their feverish nightmare sequences that are disturbing and terrifying. However, they’re not too obscure to prevent the audience from understanding the mystery of Devitt’s and Beechworth’s past.

The way how each episode presents a new interesting mini-story that finds a fitting end is also remarkable, while being able to play other characters at some point in the story constantly changes one’s perception of what is happening behind the scenes. The Victorian era atmosphere is spot-on as well and even if the characters one meets aren’t very memorable, they still serve their purpose to move the story forward and let the player sympathize with Devitt’s quest for answers. A few additionally playable, but rather short episodes are unlocked after beating the game, so that one can experience other timelines and have a different perspective on people and events, which provides more background story.

Masters of storytelling influences
While story and character development are interesting, one shouldn’t expect a truly original work. If one knows Edgar Allen Poe and especially H.P. Lovecraft stories, then there’s nothing one hasn’t read before, although the quality of the writing is of a very high standard. The mythology about something lurking in the dark or in another reality is no new concept, but it has to be said few games have managed to create a sense of unease than The Last Door does with its psychological horror. Reading disturbing letters and hearing scary stories builds up an unbearable sense of dread at times, as one’s imagination of horrible things happening is complemented by scary sounds and visions. One’s conception of reality is often questioned, too, something that could only be found in the best of Lovecraft works.

Not for a puzzling mind
The game often feels like an exploration game where following clues and talking to people is more important than puzzle solving. There are a few inventory-based combinations, but they’re not as numerous as in other point-and-clickers and rather easy due to few items and locations. The only problem is that one can easily miss objects in the pixel backgrounds and a few puzzles can only be solved with a bit of trial and error. However, the often weird solutions fit nicely into the whole horror scenarios, so with a bit of twisted thinking, it doesn’t take too long to progress, which is great, as there are way too many adventure games where puzzles slow down the plot too much. 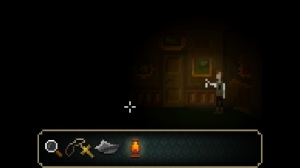 What you see isn’t as frightening as what you imagine
At first glance, one will undoubtedly find the low-res character models and pixelated backgrounds quite difficult on the eyes, but the more one plays the more one realizes that this minimalist approach to graphics is intentional, not because of the low budget, but to create atmosphere. The less one can distinguish certain things, the more one fills in the missing details, so e.g. if some black shapes are picking on a big red pixel mess, one instantly makes out crows but doesn’t know what it is they’re feeding on, something that wouldn’t work with beautifully hand-drawn graphics. Walking through the dark with a lantern that only lights up parts of the screen Devitt is in, with the rest being black or in indistinguishable shapes also adds to the creepy horror atmosphere. So even if the problem with easy-to-overlook items remains, the visual trick works wonders to immerse the player.

What you hear is more terrifying than what you see
The same holds true for the very good audio design. Despite using free online sound effects, these are enough to create atmospheric set-pieces. Just listening to the meowing of a cat in a basement that has a horrific purpose in one of the stories runs shivers down one’s spine, while the amazing music with its classic instruments like violins or piano evokes a melancholic feeling that fits the Gothic horror setting. It’s also great how silence and music change depending on the narrative or situation, making the game feel even more like a scary tale come to life, even if one has to accept the fact that there isn’t any voice acting. 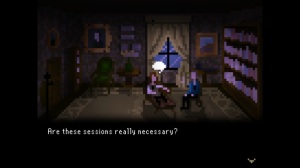 Classic terror in chapters
The Last Door: Season One shows what is still possible in the classic point-and-click adventure genre in terms of spinning a good scary, if somewhat familiar, yarn with a low budget look that enhances the frightening experience. The episodic format works exceptionally well and keeps the player guessing until the end which comes after only 4 hours, but the developer doesn’t make the mistake to leave too many questions unanswered at the end of each chapter, with most stories presenting their own resolutions. Fans of Edgar Allen Poe and H.P. Lovecraft will be hard-pressed to find a better example of intriguing storytelling which uses all sorts of neat literary tricks and goosebumps-inducing set-pieces that aren’t over-used, but slowly built up like in the best of classic horror tales. Adventure gamers who want more puzzles will be disappointed, though, as the focus is clearly on the narrative.

Buy the mobile version on
the iTunes store
Google Play