Pixel adventures are all well and good when it comes to spinning a scary yarn, but when seeing the horror in 3D is concerned, Bloober Team‘s first-person exploration game Layers of Fear can deliver a few sleepless nights.

A psychologically disturbed artist tries to complete his painting and is soon haunted by visions of the past.

Artful horror
Art and horror have been tied together for a very long time. Just as Clive Barker and David Lynch like to paint their nightmares and put them in their books and movies, so does the unnamed protagonist try to battle his demons. Unlike many survival horror games or other scary tales put in gaming form, it’s still difficult to find something as disturbing and beautiful, although Amnesia: The Dark Descent and Amnesia: A Machine For Pigs already did a good job to bring the Gothic tormented artist or scientist figure into the spotlight. 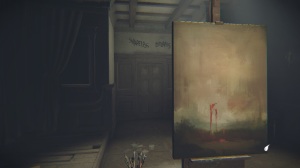 The similarities are obvious in Layers of Fear, because most of the background story and how events unfold is open to interpretation, i.e. one only gets glimpses of what is going on by reading and exploring a lot. The DNA of these games can also be found in the main protagonist who remains flat and difficult to relate to. The same holds true for the rest of the characters that only appear as voices and in scripts from the past. It’s all well and good to make the player figure things out for him- or herself, but missing out on letters with so many cupboards and drawers to search, it can be a tiring endeavor, which is even more aggravating, as the general plot isn’t that new and rather shallow. The overall writing is still quite good, although one shouldn’t expect any particularly imaginative twists or suspenseful story progression.

However, the way how the house reveals the secrets of the painter and his family’s dark past is intriguing enough to continue on a rather short journey of just 2-3 hours. Different endings can lengthen the playtime, but as the decisions to achieve these aren’t made clear, e.g. relying on specific objects that have to be found and looked at, it’s questionable if another playthrough is a viable option. As there’s only one savegame, it can also become a chore with checkpoints being far apart, which is a shame, because the chapters-like structure is inviting enough to complete as much as possible in one sitting.

Scary walk in the terror mansion
Being an exploration game rather than survival horror, one should be aware that this means something of the terror usually associated with the genre is taken away. In very few instances it’s necessary to restart a checkpoint, but other than that, the term ‘ghost train simulator’ is more appropriate. Of course like the fun attraction, one is in for quite some scares, especially of the jumpscare variety. While the game often creates subtle suspense, instances where something is thrown at the player are more frequent. It’s usually not much of a problem if this wouldn’t feel so forced and becomes repetitive. The use of gory scenes and disturbing imagery can also be too much for some people, while motion sickness is almost a given with changes of perspective, slow movement of the character, and the way things are presented. Trying different options with the POV and mouse/gamepad controls sensitivity can help, but it’s one of those titles that can make people literally sick.

Of course the reason why one plays a horror game or watches a horror movie is that one wants to be scared and disturbed. The game partly succeeds in this area, although it depends on how much one can take. It’s certainly not scarier than the original Silent Hill or Resident Evil games, the former having a much more interesting story and environment, the latter offering the thrill of few savegames and scarce ammunition. What Layers of Fear does pretty well and what sets it apart from other titles is how the house layout constantly changes, i.e. opening doors leads to other places than one visited before. Even turning around can mean that one is suddenly in another room, while the laws of gravity are crushed by furniture flying around, the ground becoming the ceiling and vice versa. It’s a truly nightmarish sight that is certainly not for everyone. 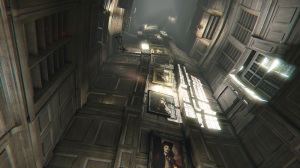 Looking for a way out and puzzles
Losing orientation is part of the experience, but it can also be quite frustrating if one doesn’t have a clue where to go or what to do, as hints of which doors are open aren’t always clear. Puzzles are also nothing to write home about, usually involving codes to find, sometimes well hidden in the environment, or much more surreal tasks to perform to escape looping corridors. As some objects can easily be overlooked and puzzle solutions are more obscure than necessary, the player is unnecessarily pulled back from an otherwise immersive atmosphere. 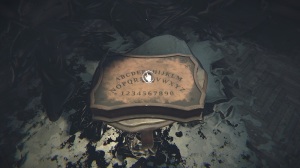 The look and sound of horror
Usually, one is blinded by high-resolution graphics in modern horror titles, and while the backgrounds in the game are detailed, they’re certainly not the best the genre has to offer. However, the art direction is more important, and one will see more than enough grotesque drawings, paintings and sick objects that have to be scrutinized. Graphical effects like blurs and shifting shapes and the interplay between light and shadow also add to the creepy and unsettling atmosphere.

The sound design is even more unnerving, changing from quieter moments to screaming, crashing furniture, slamming doors, and all sorts of nerve-wrecking effects. One could argue that this is just as forced as the visual effects, but it’s certainly enough for some heart-stopping moments. The classic music is also quite good, although it remains in the background, while the voice acting is appropriate, i.e. it’s mostly convincing but also has its fair share of overdramatic lines.

Intense but flawed ride of terror
Layers of Fear is one of those horror games that tries to use mature themes like insanity and domestic violence as a basis and disguises a rather simple story with lots of scarejumps, hallucinations, and disgusting ideas. This works quite well, even if one rarely finds an emotional connection to the main protagonist. The ever-changing mansion is the real star here, surprising the player with every sick turn of events. Navigation problems and puzzles that are more annoying than engaging prevent the game from being as fluid as it could be. All in all, it’s a scary ride that is worth taking if one has the stomach for it.