Now here’s something I haven’t had to contend with before: game title consistency. I reviewed the 2003 game as Black Mirror, even though it was known as The Black Mirror. The reason for this was because in Germany it was simply called Black Mirror like the rest of the series (see my reviews for Black Mirror II and Black Mirror III). Whoever would have thought that the reboot leaves out the definite article to distinguish it from the first one? So I’ll probably just add [2017] for a future review… Naming issues aside, the newest game isn’t simply a retelling of the original story with the same characters, as it’s not about Samuel, but David Gordon who comes back to his former home in Scotland, the Black Mirror castle, after his father committed suicide. Being troubled by nightmares and hallucinations, David seems to be cursed like the rest of his family and wants to find out if there is a way out or if the same fate awaits him. The whole mystery doesn’t sound much different from what the original game offered, but as a reboot doesn’t necessarily have to include the same plot elements or characters, it can be a surprise, hopefully a better one than Alien: Covenant… 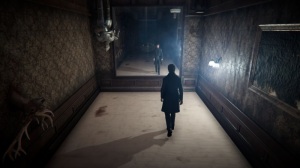 It’s interesting to see a company like KING Art Games try their hands on more serious games. The much overrated The Book of Unwritten Tales, the surprisingly fun The Book of Unwritten Tales: The Critter Chronicles, and the terribly tedious The Book of Unwritten Tales 2 offered rather tame humor and lots of puzzles, and here’s a game focusing on psychological horror with less emphasis on puzzle solving. However, they already did The Raven: Legacy of a Master Thief, a detective story I still have to play, so fingers crossed the storytelling works better this time. From the first looks of it, the creepy atmosphere with some nice background and character model graphics (although far from state-of-the-art) is left intact, which should make exploring the Gordon’s estate as visually interesting to explore as before, even though it’s now done in third-person. An interesting if not well explained feature is that one can somehow interact with apparitions in order to learn about the Gordon’s past, something that sounds similar to The Vanishing of Ethan Carter, although hopefully it doesn’t end up as obscure in its putting-events-in-a-chronological-order approach. If this adds to the intriguing investigative part of uncovering dark secrets the series is known for, then I can easily overlook the lack of puzzles (as I didn’t find them very original in the original three games, anyway).

The game is out now on PC and consoles, with the former version offering a 10% launch discount that will last until December 5, 6PM UTC. The digital extras that can be bought separately include a making-of video and the game’s official soundtrack.

Buy the digital extras for PC on
GOG
Steam

If you liked reading this article, make sure you pay a visit to Future Sack which kindly features it as well, and every LIKE or comment is appreciated on EMR’s Facebook page or FS’s Facebook page :). Or FOLLOW the blog on EMR’s Twitter page.
Using the GOG or Amazong links and buying the products also helps ;).