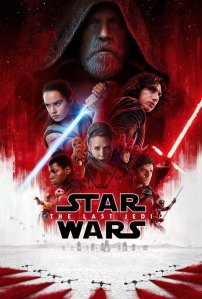 Rey wants the recluse Luke Skywalker to teach her the ways of the Jedi, while the Resistance is chased by the First Order, with Finn trying to find a code breaker who can help them disable the communications of one of their main ships so that they can escape.

Star Wars has always been good at mixing thrilling space and ground battles together with iconic lightsaber fights, fantastic worlds, and weird creatures, and it’s all present and correct in the newest movie. While some of the CGI effects look great (especially in 3D), others don’t, especially with human characters riding on either beasts or AT-ATs, something that was already a problem in Episode III: Revenge of the Sith. Taken as an entertaining blockbuster sci-fi action movie without a lasting emotional impact, the movie succeeds, but if one expects another breathtaking experience, this isn’t it. Even if Episode VII: The Force Awakens wasn’t big on the drama, it was at least consistent and made one care about the characters despite them not being as memorable as in the original trilogy.

Having different narratives running simultaneously has been a trademark of the Star Wars movies with a kind of urgency and consequence for these apparently separate parts, which is especially true for later character development. If one already tried to establish the latter in a fast-paced first movie, now would have been the time to learn more about them or at least give them the screen time they deserve. While Luke Skywalker as the embittered last Jedi is great and even Kylo Ren is convincing in his megalomaniac but also tragic role, the rest of the cast is rather forgettable (and even Ren stays rather uninteresting, except for the big revelation about her heritage), which has to do with introducing new characters who are simply used for driving forward some parts of the story and even deliver a moral tale, e.g. mechanic Rose helping Finn to find the code breaker on a planet housing a big casino that is also rife with animal cruelty and child work/abuse, hammering home the message that during war only the rich get richer and one has to fight oppression (which unfortunately leads to a very unnecessary final scene).

Supreme Leader Snoke who looks and talks like an uber-villain remains a faceless and cheap imitation of Emperor Palpatine (which is further exemplified in scenes that are a rip-off of Episode VI: Return of the Jedi), and characters like C3PO, R2D2, Leia or Chewbacca just don’t get enough screentime (although his facial expression when looking at a roasted chicken and then seeing the small cute-as-hell-with-big-eyes-furballs Porgs is priceless) and end up as being nothing more than relics of the good old times, minus the witty dialogue. The less said about the new Vice Admiral Amilyn Holdo’s hair color, the better, as she is quickly introduced as a long-time friend of Leia, but only delivers a bit of pathos before disappearing in the who-cares-abyss. Over-the-top and unrealistic scenes shouldn’t usually be a problem in a space opera saga like Star Wars, but even this one has its internal logic and limits that are broken with a Jedi flying through space, something that would fit much better in a Marvel comic. All in all, the newest Star Wars movie delivers enough action and humor to surpass many blockbuster movies despite its long running time of 2 1/2 hours, but it often feels as if too many storylines with an over-reliance on twists were chosen instead of likable characters and their logical development.

Pre-order the BD on
Amazon UK

Pre-order the DVD on
Amazon UK

Being an avid gamer, cinemaniac, and bookworm in addition to other things the internet and new media present, I'm also very much into DIY music, rock and pop in particular. Writing short or longer pieces about anything that interests me has always made me happy. As both an editor for German website "Adventure-Treff" and UK website "Future Sack", I like to write reviews and news about recent developments in the movies, games and book industry.
View all posts by nufafitc →
This entry was posted in Movie reviews, Movies. Bookmark the permalink.