Painted Black Games‘ The Long Reach might look like a retro adventure, but it sets itself apart from its indie competition with philosophic thriller themes.

Indie adventures with a pixel look aren’t particularly new these days, with thriller, horror, and sci-fi having been done many times. Only last year I reviewed The Last Door: Season 1, The Last Door: Season 2, and The Darkside Detective, three games that used the low-res graphics for chilling results, even if the latter game also made fun of its own look. Of course there have been other games like Lone Survivor (which the developer cites as inspiration, together with The Last Door) that played with fear of the dark, so what is it exactly that makes The Long Reach special? 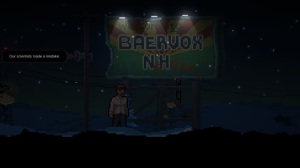 The game’s setting is the fictional town of Baervox in New Hampshire where a scientific institute’s experiment of accelerated knowledge transferring goes haywire, with citizens going on a murdering rampage. One plays junior researcher Steward who has to survive, find out what is going on, and ultimately save the world. Touted as a story about the human psyche and technological progress, it’s quite a handful to take in, so hopefully this all makes some kind of sense in the end. I haven’t been completely sold yet, but the bonkers trailer already gives a sense of survival horror that not many of the point-and-click genre can convey. Fingers crossed that being chased by sociopaths or other things won’t become tiresome and that the characters are memorable, while puzzles don’t slow down progress, either. All in all, I already love the violent pixel outbursts, chaotic music, and playfulness with shadows in the dark, so this could very well be a contender for the next Halloween Gaming Special.

The game is out now on PC as well as all sorts of consoles, even the PS Vita, although the Xbox One version is yet to come. There’s also a 10% launch discount that will last until March 21, 4 pm UTC, while a free demo might give you an idea of what to expect, too. Finally, if you like the moody soundtrack, then you can buy it separately as well.

Buy the soundtrack for PC on
GOG
Steam

Download the demo for PC for free on
GOG
Steam