Before we continue our Star Wars games review special, the very exciting news of GOG releasing the classic point-and-click adventures The Curse of Monkey Island and Maniac Mansion has to be out, as it’s an offer too good to pass.

It’s no secret that I’m a big adventure game fan, although I have a very soft spot for the classic Lucasfilm/LucasArts games. So I’m very happy that one of the greatest has finally made its way to the digital DRM-free platform. The Curse of Monkey Island is the third installment of the series with the iconic wannabe-pirate Guybrush Threepweed who is about to marry his sweetheart Elaine Marley, but unfortunately gives her a cursed ring that turns her into a gold statue. It’s a silly plot, but sets the stage for one of the best adventure games of all time. It’s not only the very funny writing, excellent puzzles, but also the hand-drawn graphics that still show a 2D presentation doesn’t have to age if it’s done in such a lovely cartoon style, not to mention the very good voice acting and timeless music. 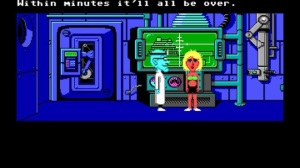 If this release wasn’t already a surprise, then Maniac Mansion evokes an even more nostalgic feeling. It’s true that the game was already included in Day of the Tentacle: Remastered, and while I reviewed Double Fine’s game and the hidden predecessor, it doesn’t mean one should skip this release. The reason is simply that it has the enhanced version of 1989 (the same as in the remaster) and also the original version of 1987. Of course the latter looks rather ugly in comparison, and it doesn’t have as many saving slots, but being able to play both without starting its sequel and looking for the computer in-game to actually use it, is a great alternative. 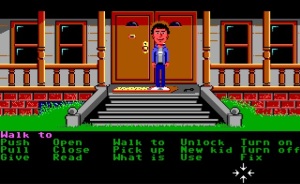 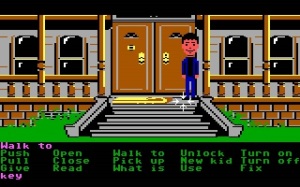 Maniac Mansion is now available with a 33% launch discount. Taking into consideration that the game isn’t easily available in retail form, there’s simply no better time than now to experience the original story about the house of the weird Edisons and a group of teenagers trying to rescue one of their friends from a meteor. Being one of the pioneers of graphic adventures with a mouse interface, this is essential to play, even if its puzzles and dead ends can be a bit frustrating.