KO-OP and Double Fine Presents offer a unique 3D puzzle game that is vibrant with strange toys life and colors.

It’s no secret that I love the games Double Fine has released so far, as the reviews for Broken Age, Grim Fandango: Remastered, Full Throttle: Remastered, and Day of the Tentacle: Remastered prove. But this is only the tip of the creativity iceberg, because the Double Fine Presents output is just as amazing, especially since these games are indie productions that are as quirky and original as Tim Schafer’s games.

The main idea of GNOG is that one explores virtual toys, and this is probably best done in VR, as one takes them apart and solves puzzles in the progress. These toys are small little worlds themselves, and together with a reactive soundtrack in addition to some very lovely art direction, this is certainly unlike any other game both in VR and outside of it. Of course one can play it without VR equipment, but the added immersion certainly helps to get lost in each puzzle world. 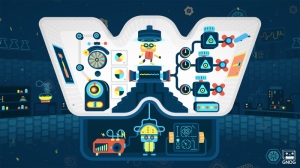 The game is out now on PC with a 10% launch discount that will last until July 24th, 4pm UTC. There’s also a PS4 and iOS version, highlighting the fact that it’s a title that uses the touch controls and the 3D space to great effect.

Buy the digital PS4 version on
the PSN store