Game release: “The Walking Dead: The Final Season” (PC,PS4,Xbox One)

Telltale Games‘ long-running interactive drama series The Walking Dead comes to an end, starting with the first episode Done Running of the fourth and Final Season.

It has been a long journey for the company, having started with The Walking Dead: Season 1 as a turning point for interactive storytelling, then moving over to all kinds of other franchises, but never forgetting about the Robert Kirkman adaptation that stayed true to the comic series and even surpassed the TV show. Now after five years, the story of young girl Clementine who went through so much in a world populated by zombies and sick people, finds an ending. 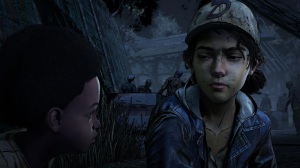 I have to admit that I haven’t played through the second, third season or The Walking Dead: Michonne – A Telltale Miniseries yet, but after reading all the three Compendium books and giving the TV show another chance soon, it might be high time to return to the game series, especially since it looks to have gone through quite some changes, not only because of the orphan boy TJ accompanying Clementine, as they find themselves in a group of other kids trying to survive the zombie (and human) threat. 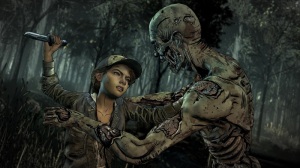 Telltale Games titles have been accused of being on-rails movies with only a bit of input from the player, but this time there’s a new over-the-shoulder camera system and one can actually explore the environments in more depth. Unscripted combat seems to have replaced constant QTEs, but it’s not only the gameplay that has received a make-over, as an all-new Graphic Black art style has been applied as well. It certainly looks darker and more realistic than before. So this should be a great way to end an even greater series in which hopefully all the decisions that have been made before will have an impact on the story and characters in the long run. The first episode is out now on PC and consoles, with episodes 2-4 being added later on. Fingers crossed that the waiting time won’t be too long.

1 Response to Game release: “The Walking Dead: The Final Season” (PC,PS4,Xbox One)