Daedalic Entertainment is back with futuristic thriller State of Mind.

Martin Ganteföhr is one of those developers who’s always tried to find new ways to incorporate more mature themes in his adventures, with more or less successful results, as could be seen in The Mystery of the Druids, 15 Days or or The Moment of Silence, the latter of which might be more in accordance with this new release, as it shows the dangers of a futuristic society losing its sense of freedom and humanity. 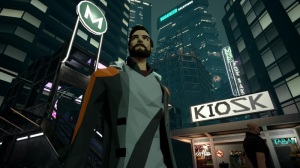 Taking place in Berlin 2048, the story revolves around journalist Richard Nolan who knows that something isn’t right, as governments try to find a remedy for environmental issues, crime, and war. The solution should be drones and humanoid robots replacing humans in the public sector and ever-present surveillance: a George Orwell state fueled by technological progress. Richard wakes up in a hospital after an explosion and finds out that his wife and son have disappeared, which seems to have something to do with their contrary government ideas.

A world-wide conspiracy about transhumanism might not be the most original concept in the wake of sci-fi movie Blade Runner 2048 and especially with the recent release of David Cage’s interactive drama Detroid: Become Human, but it’s still great to see more mature themes in Daedalic titles. Being able to play six characters sounds as if there’s more to the simple starting point of the story, and if the socio-political message isn’t handed as heavily as other Ganteföhr games, then this might be nice, although I doubt it, considering what the second trailer shows. Still, the low-poly characters’ visuals are interesting to look at, and with an emphasis on storytelling and not many puzzles, this could be interesting for an audience that doesn’t want to pick up every item and use it with everything or anyone.

Buy the artbook for PC on
GOG
Steam

Buy the soundtrack for PC on
GOG
Steam

Buy the digital version for Nintendo Switch on
the Nintendo eShop

Buy the retail version for PC on
Amazon Germany

Buy the retail version for PS4 on
Amazon Germany

Buy the retail version for Xbox One on
Amazon Germany

Buy the retail version for Nintendo Switch on
Amazon Germany

If you liked reading this article, make sure you pay a visit to Future Sack which kindly features it as well, and every LIKE or comment is appreciated on EMR’s Facebook page or FS’s Facebook page :). Or FOLLOW the blog on EMR’s Twitter page.
Using one of the GOG or Amazon links and buying the products also helps ;).