In the world of Thasys magical Mana energy is essential for survival, so magical people and creatures have started to fight for whatever is left of it. However, there are some legendary creatures who hide the original Mana source inside their hearts, and these can only be awakened by the chosen ones who are called the Prodigies. It’s all a bit too Japanese nonsense for my taste, and it gets even more confusing, as the characters one can choose from are actually called Watchers in-game and the creatures are the Guardians, but this isn’t what drew my attention to this game in the first place. 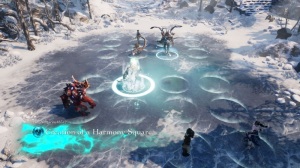 The battles are arena-based, with two teams fighting against each other on a grid-based field. There are of course different abilities for each character, and there’s a neat special ability for the Guardians. These can either use the powers of Harmony or Dissonance. So either balance helps the team or unpredictable chaotic mayhem ensues. Convoluted lore and strange gameplay mechanics aside, there’s the idea of figurine placements in the Skylander tradition to take into account as well. Still, even if the PR text doesn’t quite explain how everything works together, one is still left with the biggest selling point: the great graphics of both character models, their smooth animations, and the detailed environments. 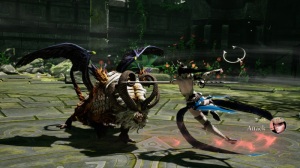 The game is out now on PC with a 15% launch discount that will last until October 5th, 10AM UTC.