New additions to the media collection in September 2018

September 2018 was again a good month for the media collection with all sorts of movies, games, books, and a surprising number of magazines.

Three Retrogamer magazines in one month, how did this happen? Well, as Future plc or My Favourite Magazines still haven’t sorted out the huge delivery problems and I even wrote to the magazine’s editor in chief, it was replacement time again.

It might not be worse than missing out on each single issue, but having no subscriber-only covers as replacements is simply fraud according to my book, as this is one of the reasons why people subscribe to it. And after customer service first denied they didn’t have these in stock, I still received them as replacements. Speaking of an organization that doesn’t know what it’s doing, where its deliveries disappear and what they have in their warehouses.

The Games TM magazines were also very late, but at least they arrived… one week or so after the replacements, so yes, maybe 1 month, sometimes 3 weeks, not what “Allow up to 14 days for delivery” means in customer service talk… 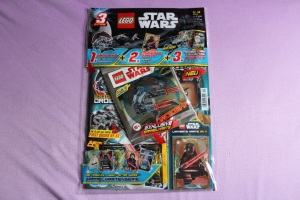 If it would be as easy as picking up the LEGO mag each month, but as the UK magazines are simply too expensive and difficult to buy, this isn’t really a viable option.

Another fun take on a well-known TV show in the form of a storybook for children thanks to Quirk Books. 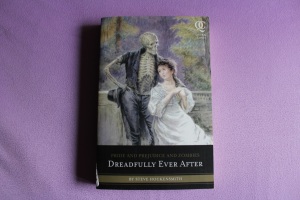 The sequel to the Pride and Prejudice and Zombies book I bought last month and hopefully more entertaining to read, as the original was just as tedious to go through than Jane Austen’s original story.

Two more King books, even though I already had Tommyknockers. Unfortunately I realized (many years after its original purchase) that it was a misprint, making quite a few pages losing some text. I got The Dark Half in preparation for the BD I bought in July 2018, and hopefully the adaptation is a bit more suspenseful and fun.

Usually I’m not a big fan of those personality tests or quizzes found in magazines, but as it’s from Quirk Books, it can be an interesting read and maybe provide some good movie recommendations along the way.

Schlock is perhaps one of my favorite horror comedies, and it was very difficult to get a copy of this except for a very expensive VHS (or watching it on YouTube). Even if Arrow Video will release it in the UK, I wouldn’t want to miss out on the very fun German dubbing. Hopefully everyone will now experience this awesomely surreal funny as hell movie that is difficult to categorize, come to think of it. 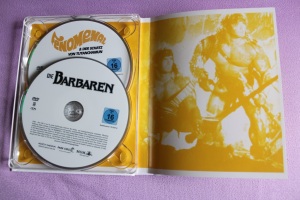 The Barbarians is one of those movies I barely remember from my childhood, but after having watched one of the best animal-like grunt/laughs of the talentless actors I’ve ever heard, I had to get this. Fortunately, after a bit of waiting, I still received my copy, as it’s not in stock at the moment and maybe out of print. With no other worldwide release, this might be the only way to watch it again, now uncut as well.

I remember having watched the first (Iron Man) and a bit of the second one (Body Hammer which is still not available in Germany), but I didn’t quite get them. The former one was too hectic with its camera work, the latter too boring. But maybe giving the first another chance and seeing if the third installment is just as over-the-top will change my opinions about this strange experimental sci-fi/horror series.

Speaking of weird movies, these three certainly belong to that category as well. I was a bit disappointed about The Greasy Strangler, as “one of the sickest”, “one of the most disgusting” movies this certainly isn’t. It had its moments, but it was only a bit strange, not that outrageous as people make it out to be. The same could be said about Leatherface as well, although at least there was no hype built around it. While it can’t hold up a candle to the Michael Bay productions, it still was entertainingly sick, especially close to the end. More about this maybe in one of a future Halloween special with all of the Texas Chainsaw Massacre movies. Freaks of Nature was surprisingly cool, but that’s all I have to say or write about it, because there will be something in the upcoming Halloween movie special week ;-).

The only 3D movie this month, which completes the Alice in Wonderland Tim Burton collection.

I don’t know how many digital copy versions I have of this game, but the only physical one was on Xbox 360 when Alan Wake was still an exclusive. Now it’s not really the PC version I already reviewed (and which was unfortunately removed from digital platforms due to music license problems), but this very special collector’s box edition. 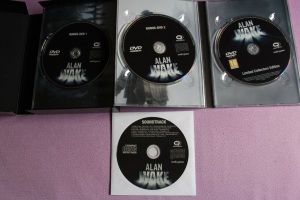 Nordic Games (or THQ Nordic now) fortunately decided to use a more robust method to hold the discs in place than what I got in April 2018, and it’s great to finally have the soundtrack and some of the bonus material on a DVD.

Opening the box already reveals some beautiful artwork and the stickers, one of the many physical goodies.

A very big manual is almost a rarity these days, but having The Alan Wake Files with lots of background information about the comprehensive lore of the fictional writer’s world is even better.

Bright Falls has always been one of those locations one would like to visit in real life, and these postcards add to this perfect illusion. 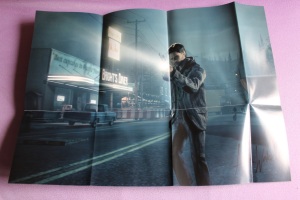 Finally a double-sided poster completes the heavy package that was totally worth the price of just 10 Euros.

Only one Xbox One game this month, and it’s another exclusive, now completing my Halo collection.

Last but not least many more PS4 exclusive titles, including Eagle Flight that convinced me to buy the PSVR equipment in June 2018, and Ratchet & Clank, an action-platformer series I loved to play on the PS2.

Being an avid gamer, cinemaniac, and bookworm in addition to other things the internet and new media present, I'm also very much into DIY music, rock and pop in particular. Writing short or longer pieces about anything that interests me has always made me happy. As both an editor for German website "Adventure-Treff" and UK website "Future Sack", I like to write reviews and news about recent developments in the movies, games and book industry.
View all posts by nufafitc →
This entry was posted in Book reviews, Books, Collecting, Game reviews, Gaming, Movie reviews, Movies. Bookmark the permalink.