The basic idea of the game is that one plays as postman (or rather post-dung beetle) Yoku who takes on the new job of delivering mail on Mokumana Island. But the island’s God is caught in a sleep he doesn’t wake up from, which results in nightmares bringing all sorts of natural disasters to the inhabitants. So Yoku has to explore the island and try to find a cure for the God and still do his mail delivery job as best as he can. In order to explore the environments, Yoku pushes or is pushed by a big white ball that doesn’t only look like a pinball, but works just like one. 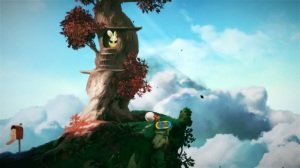 As crazy as it sounds, but one simply flips and bumps the ball around as in an arcade pinball machine to collect all sorts of things that are needed for completing various quests for the island’s inhabitants or that help to reach inaccessible parts of a level, backtracking in a metroidvania style as well as fighting big bosses included. I still remember playing this title at Gamescom 2017, being one of my favorite games, not only because of the ingenious genre mix, but also because of the vibrant hand-painted backgrounds, great animated character designs, and that happy-making soundtrack. 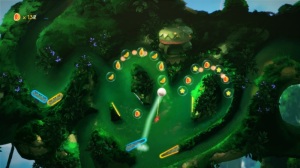 After being available on various consoles as well as on Steam, Yoku’s Island Express is now DRM-free on GOG with a 25% launch discount that will last until November 9th, 2pm UTC.