Lords of the Fallen was originally released in 2014 and was mostly overlooked because of its imitation of the Dark Souls gameplay, i.e. if one dies and gets back to one’s corpse in time, then one regains all the experience points accumulated so far and if not, then these are lost. The similarities don’t end with this hardcore gameplay mechanic, as the dark fantasy world with big bosses to fight, in this case the titular Lords, offers enough reasons to die again and again, while finding all sorts of weapons and upgrades for the different classes to survive. So why should one still play this game instead of some titles of a franchise it’s clearly based on? 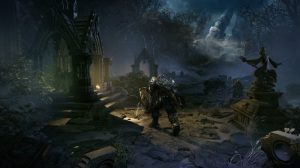 Probably because the game still looks and sounds atmospheric, and most importantly, it seems to be much more forgiving than Dark Souls. This might be a reason for many people NOT to play it, but maybe there are those who simply want to experience a dark fantasy world that isn’t riddled with quests as in so many recent RPGs and maybe there’s even an engaging storyline and an interesting main character with anti-hero Harkyn who has been convicted for all sorts of sins and is now set free to go against an army of demons and an angry god? Even if I only played a bit of Demon Souls, I can’t say that it had a strong narrative to keep me interested for very long and die too many times, and with the gory action on-screen, Lords of the Fallen might be a good compromise. 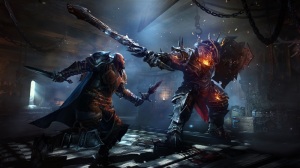 Lords of the Fallen is now available DRM-free with a 84% launch discount that will last until November 12th, 11pm UTC. Together with Call of Juarez (see release news) and Monstrum (see release news), the game is also part of the Polish week sale in which many other titles are discounted as well until the same deadline. So make sure to pay the site a visit, as there are some pretty cool games to grab.

1 Response to GOG release: “Lords of the Fallen – GOTY Edition”