Indie pixel art platformers often seem to be connected with death, not only because of frequent game overs, but also because of the stories, as could be seen in the recently released Dead Cells. This time one plays as Death’s servant who wants to become his master, but to do this, one has to battle against all kinds of foes in the decaying land of Siradon.

Playing more like a traditional RPG, one can choose between seven character classes, level up, and pick appropriate skills to overcome enemies, among them some pretty tough and big bosses. One can also outfit one’s character with over 10 weapon types, using 30 weapon abilities and spells to create a build that suits one’s play style. Levels and bosses can be tackled in a non-linear order, and if this wasn’t difficult enough, then one can go against the baddies in a harder heroic mode or unlock the New Game Plus after completing the game by setting one’s own difficulty. 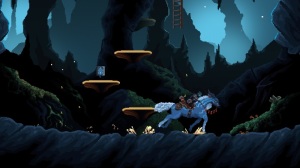 The game looks and sounds fantastic, with some lovely gothic pixel art style, fluid animations, and a thumping soundtrack. At the moment there seem to be a few bugs, but hopefully these will be fixed soon. So if you’re up for some more hardcore hack-and-slash-jumping action, then you can do so on either the PC or PS4 now.