Lizardcube‘s Wonder Boy: The Dragon’s Trap shows that old platformers with light RPG elements like the original 1989 release can still play and look great even today. 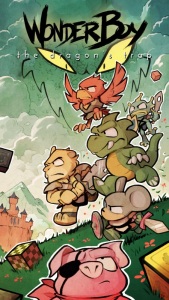 An adventurer defeats the Mecha Dragon and is soon cursed by being turned into the Lizard-Man, so he/she has to defeat all the other dragons in Wonderland to return to his/her human form.

A simple premise of adventuring
As is the case with so many older platformers, story and character development takes more than just a few steps back to pave the way for the meat of the game: enjoyable gameplay, as frustrating as it can be at times. So it doesn’t surprise that except for an interesting introduction cut-scene with stills, there isn’t much else one learns about the character, world, or adversary in the course of the adventure. But even if one is used to more narrative these days and the inclusion of a female protagonist is a nice touch, one soon simply dives into the various worlds in the old-school way of arcade gaming. 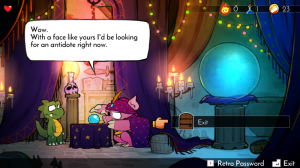 Changing animals
The most distinctive feature is that one can change into different animal forms which are gradually unlocked after defeating the bosses of each world. These all have unique abilities: The Lizard-Man simply breathes fire to get rid of enemies and projectiles, Mouse-Man walks on specific walls and ceilings, Piranha-Man swims freely underwater, Lion-Man wields a shield and a sword that can also destroy blocks from above to below him, and Hawk-Man can fly freely through the air. One can only progress by using the specific animal form in different levels, but one can’t change at whim, as it’s only possible by doing this in the village that serves as a hub to all the worlds. This is very annoying, as one has to return there when one doesn’t have the right ability to continue. 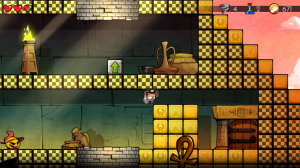 Dying like in the bad old days
While exploring the worlds is great fun, especially when discovering ways to access areas with new animal forms, this can become very frustrating because one constantly backtracks and isn’t provided with any clues where to go next, not even having a map. For a platformer, this open-world gameplay is certainly unique, especially for the time the original was released, but it might be too much for beginners. Another problem is that it’s not possible to save when going through each level. Dying doesn’t only mean starting from the beginning of the whole level, but also losing any items one has gathered before, including additional weapons with limited ammunition like arrows or small fireballs. One can collect or buy an item that immediately resurrects Wonder Boy, but as the difficulty curve is rather high and the levels aren’t small, one still has to be extra careful with each enemy encounter. Curiosity is also highly advised, because by collecting heart forms that are often hidden away, one’s life energy is increased, which is almost essential to survive.

Lite RPG-ing
What makes the game feel even more like an RPG is that one can buy different weapons and armor that don’t only have a positive effect on the health status of each individual character (as some are more effective for one character than the other), but also unlock special abilities, e.g. walking through lava unharmed. Unfortunately one special weapon that can turn stars into blocks is essential for completing the game at the end, because by using it one can form a pattern that opens a special invisible door to the final realm. It’s only too bad that this isn’t explained anywhere. Despite shopkeepers providing fun comments on one’s current animal form, one doesn’t receive any clues of what to do next. Still, being able to buy these weapons, armor and shields is highly motivating, although this can only be done by collecting coins enemies leave behind. As these also randomly drop items or ammunition, this comes close to grinding levels in other RPGs, which can only be mitigated by using a specific outfit or weapon that offers a bonus for increasing the chance to receive either more money, items or hearts that replenish health.

Niggling relics from the past
Using the right form to access certain areas and combat with platforming elements is a lot of fun, but it doesn’t come without its frustrating moments. If one gets hit, one is immediately stunned, which can often result in being thrown back against another enemy or being hit again, which is simply unfair. Many enemy attacks are also quite unpredictable, making it very difficult to avoid them. Boss encounters are disappointing as well. Despite their great art designs, every fight plays out the same and doesn’t require much strategy except for jumping-running-away-attacking rinse-repeat tactics. Only the final enemy is more difficult to defeat with more powerful items, but all in all these bosses only end up to be a forgettable obstacle to overcome before receiving a new animal form.

Looks and sounds so differently and great
Remastering a game with new visuals is always tricky, as there are those who prefer the original pixel graphics or sounds, while others want a more modern-looking title. Both are catered for here, as one can switch between both versions on the fly, even with modern graphics and classic music and vice versa. Usually one usually expects higher-resolution textures or other minor changes, but in this case one looks at a completely different game, or at least one that looks absolutely fantastic so that it becomes difficult to return to the old graphics and music. Beautiful hand-drawn backgrounds with all sorts of special effects like falling leaves or thunder and detailed character designs in addition to fluid cartoon-like animations make it a joy to compare each screen and draw the player in like never before. The soundtrack is also amazing to listen to, with beautiful orchestral set-pieces and very catchy versions of the original tunes. As one can additionally unlock artwork and videos after completing the game it’s clear to see that everyone involved in the project has done their best to make the remaster look and sound as best as possible.

A very good remaster of quite a good game
Wonderboy: The Dragon’s Trap is one of those rare cases when a remake isn’t simply a cheap cash-in, but a labor of love. It looks and sounds like a dream and is a complete overhaul of the original presentation, with each screen a work of art. The gameplay remains the same, though, which has its good and bad sides, as the mix of action-platformer and RPG-lite is as much fun as trying out the various animal forms to go through levels, which usually takes about 5-7 hours to complete. However, the high difficulty, less than perfect controls, and underwhelming boss fights prevent it from wearing the crown of best game of the genre ever, as it could have been so much more accessible for new players.

Buy the digital version for Nintendo Switch on
the Nintendo eShop

If you liked reading this article, make sure you pay a visit to Future Sack which kindly features it as well, and every LIKE or comment is appreciated on EMR’s Facebook page or FS’s Facebook page :). Or FOLLOW the blog on EMR’s Twitter page.
Using the GOG or Amazon links and buying the product also helps ;).