Can Xatrix Entertainment’s sequel Cyberia 2: Resurrection improve on the action-adventure/on-rails shooter gameplay and narrative of its predecessor Cyberia?

Cyber hacker Zak wakes up after his cryo sleep, only to be assigned to hunt down Dr. Corbin who used the remains of the Cyberia weapon to create a deadly virus that threatens the world.

Cinematic blockbuster or not
Knowledge of the previous game‘s story and characters isn’t required, even if the plot continues where it left off. There isn’t really much to remember about the story or characters, anyway, with both just serving as a background for shooting action and puzzles like before. The mix of espionage/infiltration thriller and James Bond-like action-adventure might not win any Academy awards, but it’s entertaining enough if one overlooks how silly and even surreal in some strange dream sequences it sometimes becomes. The claustrophobic atmosphere of the first game is rarely felt, usually making way for more explosive set-pieces.

Shooting stuff in and outside cyberspace
The on-rails shooting action is over-the-top fun at times, as in the beginning when one tries to escape with a futuristic car and shoots all incoming enemies in the air and on the ground. But it can also be rather dull, as one walks through corridors and has to decide in which direction to go. All in all, it’s just the same procedure as before: trying to aim and shoot as fast as possible or as best one can manage due to the wonky controls and the often fast movement or overwhelming number of enemies. Remembering attack patterns and setting priorities are really the only things that can help to survive the tricky sections. One even has to duck, jump, or move from side to side while walking. If this sounds like more freedom, it really isn’t because it adds to frustration, as jumping over acid or performing slow movements while firing at the same time is pretty cumbersome. 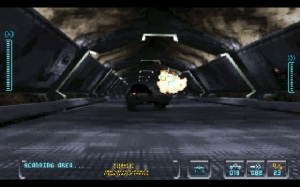 More puzzling than puzzles
Puzzles are again rather obscure at times, although cyberspace is put to much better use, at least concept-wise, as the gameplay creates even more problems. It’s great to hack into a computer system and move through its structure with folders containing information about projects or persons, adding more deductive adventure elements to proceedings. However, as this is done by flying through various stages and clicking on the appropriate symbol at the right moment, missing it results in going through the same process. As this tedious procedure is repeated later on, it outstays its welcome and doesn’t add much variety, anyway. The rest of the puzzles aren’t much to write home about, either, with more trial and error and not enough clues, but more death scenes if one isn’t quick enough or does some things in the wrong order. The BLADES scan mechanism isn’t used anymore, as a computer specialist helps with some of the puzzles and chooses the right tool for the player, so there is even less experimentation necessary.

Looks and sounds familiar
Technologically, the game isn’t much different from its predecessor, with the same highs and lows. Some well-done CG cutscenes and okay-looking environments, but outdated character models and often a pixel mess during on-rails shooting segments, while a cool soundtrack and generally good voice acting add to the cinematic but also quite lifeless presentation at times.

The same or a different game?
Cyberia 2 isn’t much different than the first game, as it still blends action-adventure and on-rails shooting action together, focusing more on the latter than the former. It’s not a bad game per se, as it’s much better than what some critics or gamers make it out to be with their nostalgic look at its predecessor that wasn’t the greatest title in cyberspace, either. A lack of originality is certainly one of the problems, while a frustratingly high difficulty level, not-so-memorable characters and a not-so-great storyline make this a forgettable, but still quite entertaining experience.

If you liked reading this article, make sure you pay a visit to Future Sack which kindly features it as well, and every LIKE or comment is appreciated on EMR’s Facebook page or FS’s Facebook page :). Or FOLLOW the blog on EMR’s Twitter page.
Using the GOG or Amazon links and buying the product also helps ;).