It’s been almost two years since my Gamescom 2017 hands-on experience with the original SpellForce 3 and due to the usual lack of time, it’s still a game I would have loved to review. Now the first DLC adds even more excitement to an already great package of strategy and role-playing gaming. As is the case with so many fantasy epics, one will have a hard time to understand all the plot elements, so the story about a disgraced general being called by the Queen to fight in another war in the land of Nortander sounds like the perfect way to thrown the player in medias res. A hatemonger trying to break the Dwarven realm and a mysterious cult of Dark Elves harvesting the souls of people should be reason enough to be engaged.

With a playtime of around 20 hours, this DLC that can also played without the base game offers more than enough content. Gameplay still revolves around building heroes and leveling up a skill tree, while sending one’s army to enemy bases, but now one can also use flying units for the first time. 5 different factions (Humans, Orcs, Elves, Dwarves and Dark Elves) add more variety, too, while the graphics and sound design further enhance a great fantasy experience. Compared to the original game, a few tweak have been made, too, including a sector-based RTS system that focuses on global resource distribution and a unique faction mechanic, plus an overhauled UI. 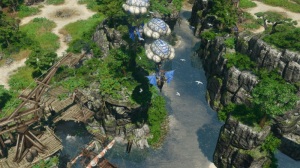 The DLC is out now on PC, and if one already owns the base game, then one will receive the expansion with a 40% launch discount that will last until June 28th, 5pm UTC.

Buy the base game for PC on
GOG
Steam

Buy the DLC for PC on
GOG
Steam