Note: This review was written in cooperation with The Idiosyncracy of Life in Words‘ editor bino32.

Housemarque‘s twin-stick shooter Nex Machina brings the frantic arcade action of games like Robotron or Smash TV back in style.

Robots have become too intelligent and want to eradicate enslaved human beings, and it’s up to one or two soldiers to save humanity and destroy the mechanical threat.

Who needs a story?

There was a time in gaming’s history when one didn’t need much of a story or characters to relate to. One simply needed an excuse for blowing things up, and in Nex Machina‘s case, the background story is as thin as it can be. In the course of the game it doesn’t matter which soldier one plays, and there isn’t much storytelling except for an intro and ending sequence. The different worlds one traverses have their own visual styles and enemies, but these places are as forgettable as the identical-looking humans. It doesn’t mean that the locales don’t look beautiful and distinct, it’s just that one doesn’t really care or has any motivation to save the enslaved humans except for surviving the onslaught of enemy robots.

Just play, alright?
No matter which character one chooses, there aren’t any special abilities or stats unique to him or her, and even if one can customize the soldier by paying coins one earns during challenges or online, these are just of a cosmetic nature and don’t add anything useful. Even during or between levels one can’t level up, unlock powers or buy items. It’s pure and frenetic arcade action from start to finish. One either shoots incoming waves of enemies or performs a dash move to evade them and get through laser barriers, and that’s about it. There are also humans one can save, but this isn’t necessary to complete a stage, as destroying all enemies is sufficient to jump straight to the next level. However, picking up these characters in distress before they’re killed by enemies provides bonus points and is also essential to unlock achievements. With so much going on in the crowded screen space, this is anything but easy, though.

Thou shalt not take a breather
It becomes quite chaotic when enemies drop down and attack from all sides (fortunately where they drop is highlighted in advance by red target zones), especially when they shoot bullets and one has to dash through them. As dashing can’t be used ad nauseam and always requires some cooldown, one is always cornered by a mass of enemies that constantly rush in with their own unique attack patterns, although it’s difficult to adapt to every threat, as there are just too many. The boss fights at the end of a world are even more difficult, because they’re impressively big and test one’s patience and skills to the limit, as they also attack more and more aggressively the less life energy they have. The main problem with these, but also in more difficult levels, is that one can’t cycle through secondary weapons like a laser. At least special items like a shield aren’t replaced by a smart bomb or any type of weapon. Still, it’s extremely annoying that one can only use the last thing one picked up, because the weapon or item isn’t always useful, e.g. a sword that can’t even reach a gorilla boss who is too far away to be hit. 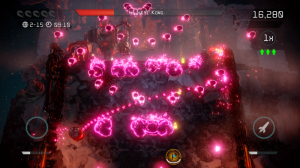 Difficultum Exponentialem
The main gameplay remains a lot of fun, but also a lot of frustration, because only the first difficulty level is manageable for most players, as the attack speed, unlimited continues, and enough lives make it the most accessible entry point. The second one already ramps up the difficulty with faster enemies, fewer continues, and simply more bullets to evade, which can already be a hurdle for many to overcome even the second boss. Even faster reflexes and more endurance are required to stay alive long enough, and sometimes luck is also needed. This is certainly a title that bears its hardcore arcade heritage proudly on its bloody sleeves.

Save, dash, kill, repeat
Longevity can only be found in score attacks, harder difficulties, and more challenges to complete. As the rookie levels can be completed in just an hour, there isn’t much to come back to, except for testing one’s skills even further. Granted, the action is relentless and there’s something pure about going through everything as fast as possible, but a bit more variety in levels would have been welcome, because the gameplay itself is very repetitive. Some levels are also much easier to complete than others, so that there is definitely a balance problem between them. It’s already difficult to react to everything on screen, and this isn’t necessarily made easier in multiplayer, which is fun, but just as chaotic, requiring less strategy or coordination and simply more shooting, as there isn’t any time to talk to each other when one is overwhelmed by enemies.

Stylish looks and pumping sounds
The game looks fantastic with its voxel engine, as the environments are as detailed and colorful as the enemy designs, although one won’t have any time to take it all in when trying to survive. One can also dabble with the graphics by having everything turned into black and white (except for some explosions and enemies) or other color effects, although the standard graphics make it easier to distinguish characters when playing together. No matter which effects one uses, the way how enemies fall into their voxel pieces remains as impressive as the explosions and other lighting effects. The action on screen is only further enhanced by a very cool 80ies synth pop/wave/rock soundtrack mixed with modern techno beats. Even if the voice acting snippets are repetitive, they add to the arcade-like experience.

Back to the 80ies action games
Nex Machina is a game that is easy to learn, but very hard to master. Like the best of twin-stick shooters, one will have a tough time to get through the highest difficulties, but for short bursts of often frustrating fun, it’s a great time waster. It looks and sounds simply amazing, but even in local co-op one will realize that there isn’t really much else going for it than hunting for a higher score and getting through waves of enemies alive.