GOG release: “A Light in the Dark”

CreSpirit, Storia, Narrator, and Sekai Project‘s visual novel A Light in the Dark offers a thrilling read for GOG users.

The number of people involved in the production of the game is nothing compared to how many visual novels have been released, not only on Steam, but also on GOG. A Light in the Dark obviously shows big-eyed anime characters, but fortunately it’s not as cute as so many other titles. It tells the dark story about rich boy Hao-Chen Jiang who is kidnapped and finds himself in the precarious position that his parents have to pay a ransom, otherwise he won’t be able to escape his imprisonment he shares with a girl who also struggles to survive. 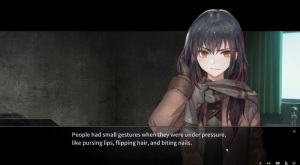 As an intimate play between two people with a different social background and the mystery surrounding their captors, the game seems to offer an intense experience, despite relying on lots of text. Reading isn’t all, though, as there are adventure elements, too. So figuring out a way to escape can only be done by examining one’s surroundings. Time is also of the essence, as stamina in the form of action points is just as precious to preserve. Telling a story about social prejudices certainly elevates the game from other titles of the visual novel variety, so players who usually avoid these types of games should give this a try.

Originally released in June 2018, A Light in the Dark is now available DRM-free on GOG with a 30% launch discount that will last until June 21st, 11am UTC.

1 Response to GOG release: “A Light in the Dark”