Platformers with physics-based puzzles seem to be a staple in the indie games scene, as can be seen with The Swapper which also proved that atmosphere and sci-fi storytelling aren’t exclusively reserved to epic RPGs and other genres. Etherborn also asks existential questions, as it’s about a voiceless being that has been born into a world where a bodiless voice is waiting for its arrival. Reaching it will make the player understand the protagonist’s own existence. 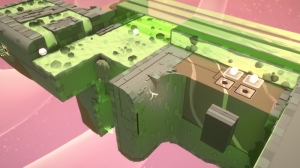 As heavy as the premise is on philosophy, as light it is on the simple idea of running and jumping around levels that can be traversed by one’s sense of gravity or the lack of it. So just as in Super Mario Galaxy‘s 360-degree planet-hopping, it’s possible to run on walls and jump on other parts of the level from a different perspective. As each level is an organic puzzle, manipulating and shifting one’s gravity is essential to progress. It’s like being in a surreal painting of M.C. Escher where top is down and down is up, making for both a unique visual and gameplay experience, especially since it all looks and sounds pretty fantastic and out-of-this world.

The game is out now on various platforms like PC, PS4, Xbox One, and Nintendo Switch. While there isn’t any launch discount, it still comes highly recommended due to its immersive atmosphere and sense of losing control of gravity and maintaining it at the same time.