It’s not all about building a profitable theme park, but also about making customized rides.

Build your dream park and rides
Running one’s own theme park can be a very tricky business, as Theme Park so amply showed with its emphasis on monetary management. RollerCoaster Tycoon is also about making money and keeping visitors happy without going bankrupt, but it’s a much more relaxed business experience. The focus is clearly on building tools, offering more creativity in how rides perform or fail, thanks to a realistic physics engine. Laying tracks is one thing, but making sure that a car makes it through a loop or around a corner and up a steep curve is a science in and of itself, even if it’s a rather time-consuming endeavor to add track after track and adjust its curves, rises, and drops. All the work does not only have the function of making a ride work without people hurting themselves, but also how thrilling some coasters can be and how certain target groups react to them: either by having fun or throwing up. One can make even more adjustments by changing an attraction’s cars by investing into research or simply changing the color for free. Everyone who has ever wanted to build his or her dream coaster, water ride or anything else that runs on tracks, will be in heaven. Everyone else who wants to spend more time on the overall park management can simply use pre-built designs to save time or anticipate every new attraction that has been researched of which there is an impressive range to choose from when they’re ready. 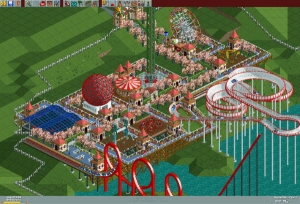 Groundwork with ups and downs
Customization comes with a price, though: accessibility and controls. As many attractions are on higher ground or even in water, entrances and exits also have to be placed accordingly, which means that one can’t build waiting queues or footpaths if the terrain isn’t suitable. The same holds true for steel girders that can be in the way of these paths. The only solution is raising or lowering the ground and building bridges or choosing a way around, which isn’t easy. What is even worse is that it takes time and a lot of money. As the perspective isn’t always great for finding the best position to build entrances, exits, and paths, one will often turn it around by 90 degrees, which due to re-orientation makes it more difficult than in the 2D perspective Theme Park used. One can choose how many squares one wants to raise or lower, but one still has to do many pixel-by-pixel adjustments.

Of visitors and staff, their problems and solutions
While beginners won’t be annoyed by money problems, tight time limits or constantly dissatisfied visitors in the early scenarios, the tutorial could have used more in-depth explanations, because most of the game works according to the learning-by-doing principle. Despite offering a few hints by the park advisor, one is usually left to one’s own devices in order to manage everything, which becomes increasingly difficult in bigger parks. So if one receives an update that visitors complain about vandalism in the park, one can only find the cause by looking at broken benches. Even if one hires security, the problem still crops up. The same holds true for waste management: Although one can set routes much easier than in Theme Park, the A.I. isn’t the best and it happens far too often that the paths are littered with garbage and vomit (because of the intensity of some rides) while the man responsible for cleaning it up is mowing the lawn.

Useful and pretty scenery
It’s not all about rides, shops, and staff though, as scenery items can help improve guests’ perception of the park, too. Some are actually quite essential, as a restroom is an obviously important facility, but trash cans, an information desk, and even benches have to be considered in order to keep the park clean, prevent people from getting lost or getting tired. Thematic items can add atmosphere to a park, too, which don’t only look nice, but make people appreciate the location more and therefore stay longer and spend more money as a result.

Time and space management with clear goals and restrictions
Micromanagement gives the player plenty to do in order to achieve each scenario’s goal, so one can decide to adjust the entrance price or individual attraction prices to earn more money, while tinkering with fewer waiting, on-ride time, and higher capacities is also possible, even if it means that attractions have more technical failures and need more repairs. If there aren’t enough people in the park, one can also use marketing campaigns to promote the park and certain shops or rides. The various goals might motivate the player more, but in general the scenarios don’t offer a lot of variety or new things: reaching a certain number of visitors, park grade, or park value rarely seems to be particularly engaging. One only unlocks new scenarios because one wants to see a new setting and maybe become inspired by pre-built designs. So in one level one might have to build the park from the ground up and in another one improve it while being restricted by the terrain. The latter is quite a challenge, as it becomes difficult to find a spot in which the new construction isn’t prevented by another ride or paths.

Playing the waiting game
When everything comes together and one finally understands all the inner workings of how to build and manage a park, there’s still one thing that is so excruciatingly painful to endure: waiting. The most critical oversight of the designers is that there isn’t any speed-up option. Even if there’s always something to do, waiting for the standard three years (and their 36 months with their oh so many days) to pass or to get to the good research stuff takes such a long time that one wishes to use a fast forward function that would make things so much easier and less time-consuming.

Deluxe additions and surprises
RollerCoaster Tycoon: Deluxe includes both expansion packs Corkscrew Follies and Loopy Landscapes. The former has more attractions and shops, in addition to a banner sign that can feature customized text or (much more useful) prevent guests from passing under it and therefore seals off sections of the park the player does not want to have overcrowded. It’s also possible to prevent guests from leaving the park to help maintain a specific number of guests. The latter also adds new rides and scenery, but also new construction and building options, new music, and more freedom to create a park. What is even more interesting for fans of theme parks: The ultimate edition offers players the chance to tinkle with real-world parks like Heide Park or Alton Towers, which might look out of date, but are still a nice nostalgic trip, featuring some impressive park designs. 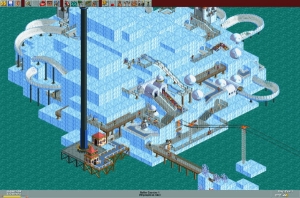 Sounds and looks like fair fun
The graphics are still good, at least when it comes to detailed buildings, although the higher screen resolutions can make it difficult to make out what happens on the ground with all the visitors and staff walking around. Customers aren’t quite as fun to watch as in Theme Park due to being less cartoon-y. However, there are still a few nice effects like ducks swimming on a lake or balloons rising in the air (that can even be popped if one feels like it). Sound effects and music add to the overall immersive feeling of being in a theme park, with various crowd mumbling, laughter, and screams that are synchronized with each turn of a rollercoaster ride’s corner. Fortunately, there aren’t any vomiting effects. Each ride has a specific type of music playing that can also be adjusted, and while they fit the funfair vibe, they’re not very catchy or memorable and soon become only background noise when playing for a longer period of time.

Classic building fun with theme park nostalgia
RollerCoaster Tycoon: Deluxe might not win a prize for originality as Theme Park did, but it still offers a fun opportunity for theme park lovers and micromanagement/building simulation fans to spend hours of playtime with a wide selection of attractions. Especially those who have always wanted to build their own rides will have a good time with all the customization options. While the scenario mode adds a bit of goal-oriented structure, it doesn’t get rid of repetitiveness, although beginners suffer much less time pressure and hardcore management elements. If only the problem of long waiting times would have been addressed by including a speed-up function, then the game would have been more entertaining. Still, it’s telling that there is a screenshot function to capture the best moments or simply the beauty of a park one has spent hours to build.